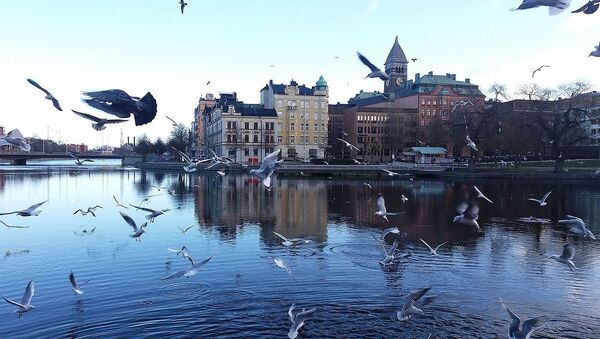 CC BY-SA 4.0 / Västgöten / Norrköping
Subscribe
An old factory building in the Swedish city of Norrköping has become the world's tallest candlestick, where advent lights are switched on every Christmas.

The tradition of putting lights on the smokestacks of an old factory building in the middle of the industrial landscape of Norrköping dates back to the turn of the millennium. Today, the former steamhouse has become a popular landmark, especially around Christmas, when it lights up.

Yesterday, new lights at Värmekyrkan were mounted by the construction company Lambertsson, the local newspaper Norrköpings Tidningar reported. With a total height of almost 50 meters, the world's tallest candlestick needs two crane trucks to assemble it.

As one of the lamp constructions did not work after transportation to the site, the staff had to replace it with a new one before the installation could finally begin.

The total height of the construction is 49.5 meters, broken down into the ceiling height of 20 meters, chimney height of 26 meters, and lights height of and 3.5 meters. The "lights" are in effect fan-blown bags provided with 70-Watt LED light bulbs. The heat from, the light prevents the contraption from icing over in the winter weather.

Värmekyrkan (Heat Church) was designed by architect Ivar Tengbom and was completed in 1927 for the local cellulose company Holmen. In 2000, it was converted into a party venue with room for almost 1,000 visitors. The building has four 26-meter chimneys.

This year, Värmekyrkan will switch on its advent lights on Sunday, December 3, adding a new light each Sunday until Christmas. The lights will burn until the end of January.

Norrköping is a city in Östergötland County and the seat of the eponymous municipality, located 160 kilometers from the national capital of Stockholm. With a population of close to 100,000 inhabitants, Norrköping is Sweden's tenth most populous city.

The abundance of water power and a good harbor led to the emergence of a vibrant textile industry, earning Norrköping the nickname of "Sweden's Manchester."