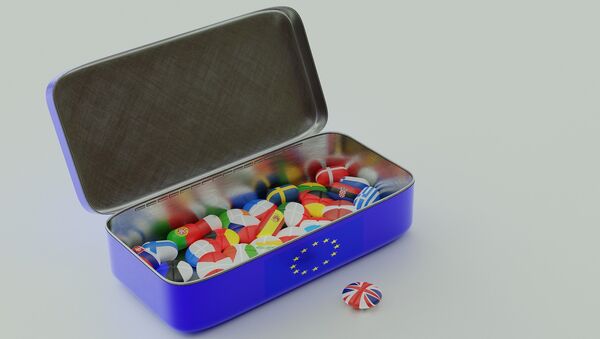 The researchers note that British pound lost about 10 percent of its value one year after the withdrawal referendum, with inflation rising from 0.4 percent in June 2016 to 3.0 percent in October 2017.

LONDON (Sputnik) – According to research conducted by the UK-based Centre for Economic Performance, "by June 2017, the Brexit vote was costing the average household £7.74 per week through higher prices. That is equivalent to £404 per year."

According to the research, Brexit negatively affected such indicators as the inflation rate, sterling's exchange rate, as well asthe incomes of UK citizens and their living standards.

"This is not a forecast, it's about costs that have already materialized. We looked at the rise of inflation which has gone up in the wake of the referendum. We can trace 1.7 percent of the inflation increase since then to the Brexit shock," Dennis Novy, Assistant Professor at the London School of Economics told Sputnik.

.@DennisNovy et al: "the referendum result pushed up UK inflation by 1.7 percentage points, which amounts to an annual (and potentially permanent) cost of £404 for the average British household."#Brexit!!! https://t.co/RiXx0o9TJg

Households are more than £800 worse off after Brexit, study says: The average household is paying £404 a year extra due… #Brexit #Politics

"Higher inflation has also reduced the growth of real wages. The impact of the referendum is equivalent to a £448 cut in annual pay for the average worker. Put another way, the Brexit vote has cost the average worker almost one week’s wages due to higher prices," the research showed.

According to Professor Novy, the pound’s depreciation has also increased the cost of producing products within Britain, not just importing them.

"Even if I buy a UK domestic product, it may have been produced using some foreign inputs, so through the foreign inputs you would also have an increase in the price," he explained.

"Whatever people want to say, they have said it but the issue for us is we’re trying to look at the evidence and will try to report whatever the evidence tells us," Professor Novy told Sputnik.

Earlier, the head of the European Council Donald Tusk said that the EU is ready to continue talks on future relations with Britain, if more progress is made by London on the terms of Brexit.

The United Kingdom voted to leave the European Union in a referendum in 2016. The Brexit negotiations officially kicked off in June and are due to be completed by the end of March 2019.