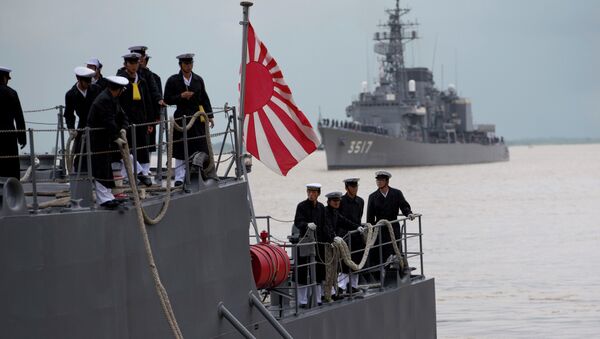 © AP Photo / Gemunu Amarasinghe
Subscribe
A Japanese newspaper has acquired a plan detailing what Tokyo would do with the countless refugees from North Korea that could result from a military crisis on the Korean Peninsula. The plan isn’t too rosy: it involves emergency detention centers, quarantines and interrogations to weed out spies and terrorists.

Separating North Korea and Japan is about 600 miles of open water in the form of the Sea of Japan, and should the Korean Peninsula be embroiled in war, that sea could be filled with North Korean refugees trying to get the hell out of dodge. Were this to occur, the Japanese Coast Guard would secure the fleeing North Koreans and bring them to port cities for screening.

Those deemed to be potential threats would be expelled, reported Yomiuri Shimbun — although it didn't say where they'd be expelled to. Those allowed into Japan would be transferred to "emergency detention centers" and held until Tokyo figured out what to do with them.

Junji Ito, a spokesman with the Ministry of Justice's Immigration Bureau (not to be confused with the horror manga artist of the same name), said that the Japanese government was considering a variety of options if they suddenly faced an influx of North Korean refugees.

Deputy Prime Minister Taro Aso, known for his hardline conservative views and controversial statements — such as a recent statement in November claiming Nazi dictator Adolf Hitler's "motive was right," a statement he later retracted — had a few ideas back in September. Specifically, he floated the possibility of just outright killing refugees.

"They are illegal refugees," Aso said to reporters on September 23. "They might carry weapons. Terrorism might occur. We have to prepare our government to deal with such a situation."

"They could be armed refugees. Would the response come from the police or defense operations by the Self-Defense Forces? Would they be shot? We must give this some serious thought."

Japan was involved in one major refugee crisis in recent decades: the flight of Cambodians, Laotians and Vietnamese people after the 1975 end of the Vietnam War and Laotian and Cambodian Civil Wars. About 10,700 people, mostly Vietnamese, arrived in Japan as refugees between 1975 and 1995, a tiny fraction of the 2.5 million total refugees.

HRW's condemnation doesn't seem to have had much effect on Japanese policy, as Yomiuri Shimbun reported that Tokyo was unlikely to accept any refugees from the beleaguered Rohingya people of Myanmar, either. of Of the 8,561 applications they received in the first half of 2017, Japan granted refugee status to exactly three of them.