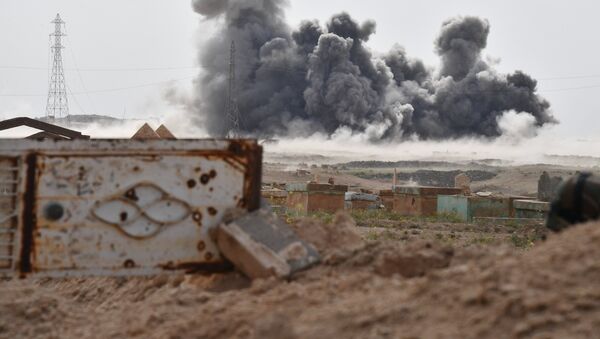 Russian Defense Ministry’s Center for Syrian Reconciliation has discussed with the representatives of the Syrian Arab Red Crescent a plan of humanitarian convoys to the liberated areas of Syria's Deir ez-Zor.

MOSCOW (Sputnik) — The head of the Center for Syrian Reconciliation, Lt. Gen. Sergei Kuralenko, said at a briefing on Wednesday that the issue of the evacuation of residents of Eastern Ghouta was also raised during the meeting.

"The officers of the Center for reconciliation of warring parties held a working meeting with representatives of the Syrian Arab Red Crescent, during which the plan for carrying out humanitarian convoys for the period from November 19 to 26, including the liberated areas of Deir ez-Zor, was clarified, the evacuation procedure for the residents of Eastern Ghouta seeking medical care has been specified, as well as the medical institutions for their treatment," Kuralenko said.

Israel Free to Act in Syria to Defend Own Security - Defense Minister
He added that the officers of the Russian reconciliation center and Syrian armed forces have ensured the safety of the joint humanitarian convoy of the Syrian Arab Red Crescent and the International Committee of the Red Cross, during which thousands of residents of the liberated areas of Deir ez-Zor and Abu Kemal received food and necessities.

According to Kuralenko, on the way back, 20 families were evacuated to the Center for Internally Displaced Persons.

He also noted that the officers of the reconciliation center, along with representatives of the Syrian armed forces and Homs De-escalation Zone Committee, ensure the safety of the joint humanitarian convoy of the United Nations, the Syrian Arab Red Crescent and the International Committee of the Red Cross.

"In the town of Ar Rastan, located in Homs de-escalation zone, a total of 228 tonnes of food and medicines have been delivered to the residents in need. The convoy route passed along the section of the M5 Khama-Homs road," Kuralenko said.

The head of the reconciliation center concluded that the security of crossing of the warring sides' contact line was provided by military servicemen of Russian Armed Forces who are serving at the checkpoint No. 2 (Tahun-Donguzia) at the border of the second zone of de-escalation.