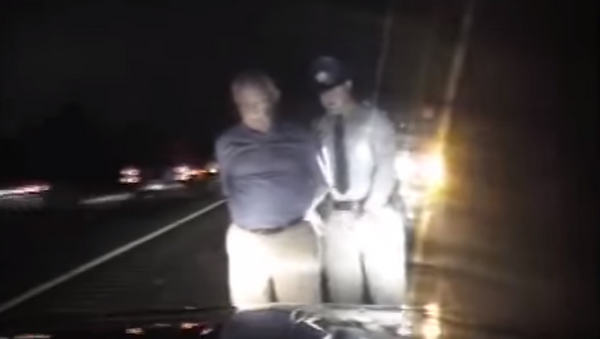 On Saturday, GOP South Carolina State Senator Paul Campbell was arrested and charged for driving under the influence of alcohol and providing false information to police. Dashcam footage from the incident was released Wednesday by the South Carolina Department of Public Safety.

"This is not fun. This kinda sucks," Campbell is heard saying in the video while sitting in the police cruiser. "I'm going to change the law on this… I'm not DUI. I wasn't driving the car anyway."

The 71-year-old politician claimed that his wife, Vicki Campbell, was driving the vehicle when the unfortunate series of events unfolded.

​"This may cost me my job," the GOP figure mumbled to the arresting officer, before complaining about being handcuffed. "You know that, I guess."

But the small talk didn't end there. Campbell went on to remark that he was also likely to lose his position as the chief executive of the Charleston airport, which earns him a $250,000 salary, Post and Courier reported.

"Of course, I may not be after this," he later quipped.

Trying to be civil during the whole debacle, Campbell went on to add that he was "happy to take a Breathalyzer test." Once the two arrived at the jail, Campbell's blood-alcohol level was recorded at.09. The legal limit in the Palmetto State is.08.

Campbell was eventually slapped with a DUI charge along with lying to the police — the second charge because he told officials that his wife was driving, but this turned out to be false. According to Michaela Caddin, the 21-year-old driver Campbell rear-ended, the two switched seats just moments after the accident.

"I was shocked when I heard the story he told the media," Caddin said in a statement. "I was afraid when I heard a man entrusted with so much power say something that was so different from what I saw happen."

Ultimately, Vicki Campbell was also charged with lying to law enforcement, though she was not arrested, Post and Courier noted.

Speaking to reporters, Alan Wilson, South Carolina's state attorney general, said that under South Carolina law, legislators are required to be suspended if indicted for a crime of "moral turpitude." Per Wilson, lying to cops would make Campbell eligible for suspension if he is indicted.

Citing Campbell's traffic ticket, the outlet reported the politician is scheduled to appear in court on January 8 — a day before the 2018 legislative session begins.