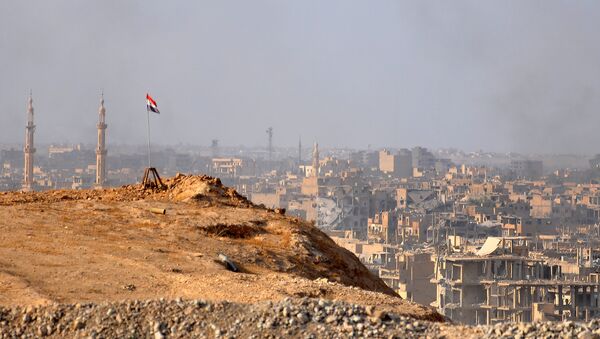 The Syrian servicemen have confirmed to Sputnik, that the city of Deir ez-Zor, the biggest in the country's east and the last stronghold of the Daesh terrorist group, has been completely liberated.

After the three-year-long siege of Deir ez-Zor was broken on September 5, the Syrian government forces announce they have cleared the city from last Daesh fighters, which marks another key defeat for the terrorist group, which has recently lost most of the territory it occupied during the Daesh rampage across Syria and Iraq in 2014.

Earlier a military news service run by the Syrian army's ally Hezbollah has reported, that the Syrian army gained control of al-Hamidiya, Sheikh Yassin, al-Ardhi and al-Rashidia districts, and prepared to enter the final district held by terrorists.

E. #Syria: swift advances by pro-Assad forces backed by #RuAF in #DeirEzzor-city where #ISIS pocket reduced by half past 2 weeks. pic.twitter.com/XKT3wdoTgn

Deir ez-Zor, located on the west bank of the Euphrates river, is a center of oil production in Syria and a capital of the province with the same name bordering Iraq. By the beginning of 2015 Daesh militants had gained control over some parts of Deir ez-Zor and imposed a blockade on civilians and government forces in the rest of the city.

In Summer 2017, after the liberation of Palmyra and western Syria, the Syrian government Army began to advance toward Deir ez‑Zor province and in September with the Russian Aerospace Forces' aerial support the siege was broken. The breach of the blockade secured a foothold for further offensives of the Syrian Army.

A rival offensive backed by the US-led coalition is pressing Daesh on the eastern bank of the Euphrates river. Iraqi forces announced on Friday they entered the city of Qaim and began the anti-terrorist operation from the Iraqi side of the territory held by the the Daesh militants. 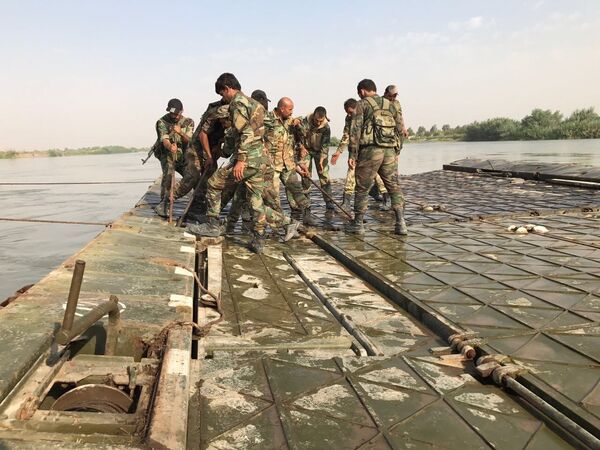 Syrian Army crosses Euphrates River east of Deir ez-Zor
© Sputnik / Mikhail Alayeddin
/
Go to the photo bank
Newsfeed
0
Access to the chat has been blocked for violating the rules . You will be able to participate again through:∞. If you do not agree with the blocking, please use the feedback form
The discussion is closed. You can participate in the discussion within 24 hours after the publication of the article.
To participate in the discussion
log in or register
loader
Chats
Заголовок открываемого материала