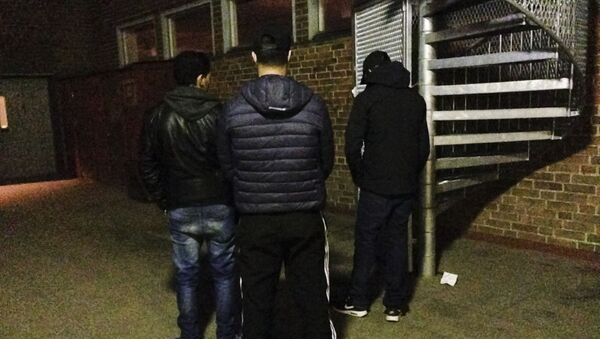 © AP Photo / David Keyton
Subscribe
As the nationality of perpetrators has long been a taboo topic in Sweden, a new private survey on this polarizing issue suggesting the staggering proportion of immigrants among rapists has triggered strong reactions in the Scandinavian country without ever making national headlines.

A private 80-page investigation conducted by a 40-year-old former truck driver and present-day retailer from Eskilstuna is questioning the official notion of immigration being largely beneficial to Sweden by suggesting that men of foreign descent are largely overrepresented in sexual assaults.

By his own admission, Patrik Jonasson surveyed 4,142 rulings regarding sex-related crimes passed by 40 Swedish courts between 2012 and 2014. The study, which took several months to compile, indicated that a whopping 95.6 percent of rapes and 90 percent of group rapes had been committed by men of foreign descent. Men from the Middle East and Africans were particularly overrepresented in various forms of sexual offences.

Additionally, two out of three rapes with aggravating circumstances were reportedly committed by asylum seekers or men who had been recently granted residence permits. By contrast, the proportion of Swedes convicted of sex-related crimes, has decreased sharply since 2013.

While almost completely ignored by Swedish media, the study was nevertheless praised by, among others, the Svenska Dagbladet daily's leading Conservative columnist Ivar Arpi, who tweeted that it was "amazing" that a private citizen could do this kind of research utilizing the publicity principle, yet lamented the fact that the Swedish Crime Prevention Council (Brå) failed to some up with similar statistics. He also contended that Jonasson's take was fundamentally correct.

​Swedish political scientist Tino Sanandaji, a staunch critic of unfettered migration and the author of "Mass Challenge," argued that there was "nothing crazy" with Jonasson's statistics and called on Brå to abandon its practice of cover-ups.

Sweden Enlightens New Arrivals on Dos and Don'ts of Sexual Life
Jerzy Sarnecki, a professor of general criminology at Stockholm University, however, argued that the study was done in an "amateurish" way, given that Jonasson had no prior experience of this sort of tasks. He also stressed alleged bias of Jonasson due to the latter's affiliation with the anti-immigrant Sweden Democrats party, the Nyheter Idag news outlet reported.

Despite calling the study "angled," he nevertheless admitted that immigrants made up a disproportionate number in several types of crimes, including sexual assaults. However, Sarnecki stressed that the study focused exclusively on cases that reached court, disregarding the overall situation with rape and sexual abuse in Sweden.

In an interview with Nyheter Idag, Patrik Jonasson openly admitted lacking any academic qualifications, yet argued that this statistical level did not impose any specific requirements. Despite Patrik Jonasson's political colors and his lack of academic merit, he insisted that the data is fully reliable.

"I believe you can fully trust that the data I present in the survey is in line with reality," Jonasson argued, claiming that he "came as close to the truth as he possibly could."

Do We Hear Wedding Bells? Sweden Mulls Pros and Contras of Polygamy
Last time Sweden compiled a survey on the percentage of crimes committed by the foreign-born was in 2005, more than a decade ago, and it covered the period between 1997 and 2001, that is before the mass immigration of the recent decade, which brought dramatic changes to Sweden's demographics and society. Since then, profiling by nationality has been considered unethical and offensive.

Jerzy Sarnecki previously contended that the number of crimes committed by immigrants was "very small."

As of 2011, a Statistics Sweden study showed that around 27 percent of Sweden's population of 10 million had a full or partial foreign background. Over the last two years alone, however, Sweden has taken in over 200,000 immigrants.