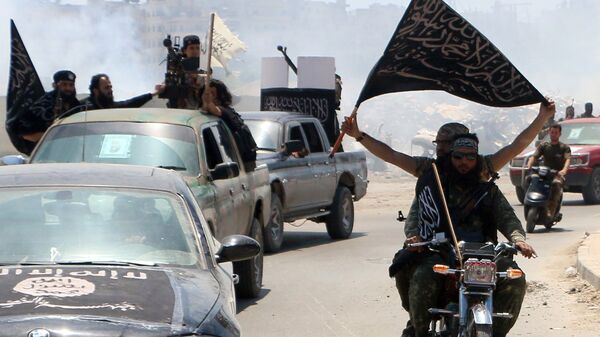 The US government’s acknowledgement that Hayat Tahrir al-Sham terrorist group affiliated with al-Nusra Front has been using chemical weapons is a welcome though long overdue admission, analysts told Sputnik.

WASHINGTON (Sputnik) — On Wednesday, the US State Department issued a Syria Travel Warning, where it wrote that the Islamic State (commonly referred to as ISIL/ISIS or Daesh in Arabic) and Hayat Tahrir al-Sham terrorists, linked to Jabhat al-Nusra terrorist group use "suicide bombers, kidnapping, small and heavy arms, improvised explosive devices, and chemical weapons" in Syria.

Earlier on Friday, the Russian Defense Ministry said that it was the first time the United States admitted the use of chemical weapons by terrorists in Syria.

The terms used in the advisory abandoned monolithic official US insistence for more than four years that all chemical attacks in Syria had to be blamed on the legitimate government of President Bashar Assad, Cobban pointed out.

US State Dept. Admits Nusra Front Terrorists Use Chemical Weapons in Syria - MoD
The US insistence on scapegoating the Assad government for all uses of chemical attacks despite serious evidence suggesting otherwise had strongly conditioned the US public to approve continued military action against the Damascus government, Cobban recalled.

"This has become the deeply ingrained ‘conventional wisdom’ in the public discourse here in the US, although experts in telemetry and chemical warfare have challenged this view at many points," she said.

Cobban also observed that the new Travel Advisory nowhere explicitly accused the Syrian government of using chemical weapons but it did finally identify by name al-Sham and Daesh terrorist groups.

"It is notable that ‘ISIS, Hayat Tahrir al-Sham, and other violent extremist groups’ are the only actors singled out in this Travel Advisory as using chemical weapons," she said.

The US government was now officially obligated to report its knowledge and evidence for the use of chemical weapons by the Islamist groups to the Organization for the Prohibition of Chemical Weapons, which is based in The Hague, capital of The Netherlands, Cobban added.

The Travel Advisory appeared to have been aimed overwhelmingly at US citizens who might seek to travel to the opposition-held part of Syria, Cobban remarked.

The advisory "makes no mention of the threats that residents of or visitors to government-held areas continue to face from Daesh and from the until-recently-US-backed opposition forces," she said.

The US government still needed to acknowledge more loudly and clearly that Islamist rebels had been using these weapons and to identify them specifically and publicly by name, Cobban insisted.

US KNEW ALL ALONG

The US government was finally started to acknowledge that groups it had supported had employed chemical weapons in Syria where the Trump and Obama administrations had sought to blame the Damascus government for such attacks, University of Illinois Professor of Law Francis Boyle told Sputnik.

These policies were part of a wider US strategy to topple the Damascus government that was clearly illegal under international law, Boyle pointed out.

The United States had backed the Syrian terror groups "as part of an illegal attempt to overthrow the Syrian government in violation of the United Nations Charter and the rulings of the World Court in the Case of Nicaragua versus United States of America (1984-1986)," he said.

US policymakers could have had no doubt that the terror groups they were financing, helping to organize and arming had been s using chemical weapons, Boyle observed.

"Of course the United States government knows full well that some of its surrogate terrorist organizations in Syria have used chemical weapons," he said.

OPCW Says Found Evidence of Chemical Weapons Use in Syria's Hama in March
Over the past four years, successive US administrations had deliberately and cynically blamed Damascus for chemical attacks that they knew their own allies had carried out, Boyle stated.

"Both the Obama administration and now the Trump administration have maliciously exploited their surrogates’ uses of chemical weapons as pretexts and propaganda to justify direct US military intervention into Syria," he said.

Boyle also warned that even after the admission buried deep in this week’s Travel Advisory, the US government could again in the future blame the Syrian government for chemical attacks that it knew had been carried out in reality by its own allies.

"It very well could happen again. Caveat emptor!" he said.

Al-Nusra Front controls Syria's Idlib Governorate through the umbrella terrorist group al-Sham and is still thought to be a front for al-Qaeda.