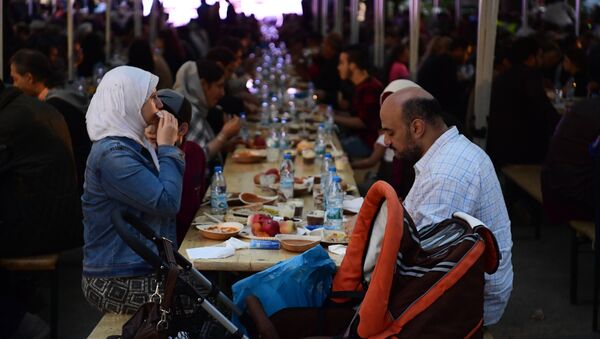 Interior Minister Thomas de Maiziere is facing criticism after suggesting that Muslim holidays be observed in Muslim-majority areas of Germany; opinion polls suggest a majority of Germans are against the idea.

A recent suggestion by Interior Minister Thomas de Maiziere that Muslim holidays be observed in Muslim-majority areas of the country has raised opposition among members of his Christian Democratic Union party, and society at large.

De Maiziere aired the idea during a speech at an elections hustings in Wolfenbuettel, Lower Saxony. He told those assembled that he is "ready to hold a discussion about whether we should introduce a Muslim holiday," in areas "where there are a lot of Muslims."

How Can Germany Manage Its 10,000 Strong Population of Salafists?
However, his speech wasn't received well by the local branch of the CDU, which eventually came second to the SPD in the state elections held on Sunday. Bernd Althusmann, CDU chairman in Lower Saxony, told dpa that he sees "no need for change" to Germany's established holidays, which have a "long tradition."

The speech aroused criticism among members of his Christian Democratic Union party as well society at large. Some 70% of Germans are opposed to the idea, according to opinion polls.

Cologne-based lawyer Jaklin Chatschadorian, a former member of the Christian Democratic Union (CDU), told Sputnik Deutschland that she is one of those who are opposed to the idea.

"I would count myself as one of the 70% and reject it [the idea]," Chatschadorian said.

"It is rejected by 70% of people yet major parts of the political system are in favor of it. This shows that there is a growing the gap between ordinary people and politicians."

"With an Islamic holiday, we would be celebrating and promoting a religion that is not constitutional. What exactly would we celebrate? Normally, Muslim holidays are always associated with certain victorious battles and have a completely different message to Christian or Jewish holidays."

However, Safter Cinar, chairman of the Turkish community in Germany, told Sputnik that German society "should at least think about" the idea raised by de Maiziere.

"Regardless of the question of whether Islam belongs to Germany or not, we could think about some specific solutions, for example whether students and civil servants with a Muslim background might remain at home during Islamic holidays."

I Want to Believe: German Monastery to Shut Its Doors After Almost 900 Years
Until 1990, this was common practice in Berlin, Cinar said, adding that any Muslim holiday would have to be decided at the state, not the national level.

In the face of such opposition, de Maiziere qualified his comments on Tuesday, saying that "I made no suggestion of introducing a Muslim holiday," and giving an assurance that "I won't make such a proposal."

In his interpretation, the interior minister had merely wanted to draw attention to the fact that "in Germany, our dominant culture is the Judeo-Christian one," and "find a solution for the minority, just as there are some catholic holidays celebrated in protestant areas of Germany," Bergner said.