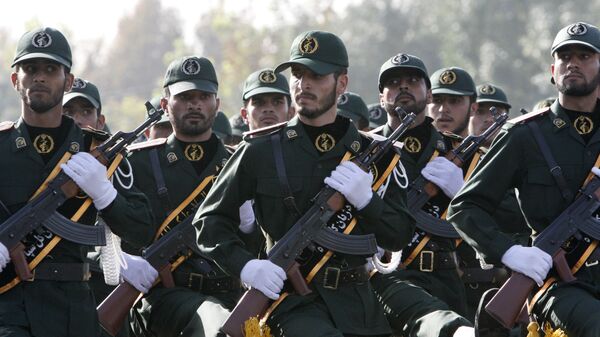 © AP Photo / Vahid Salemi
Subscribe
International
India
Africa
After weeks of speculations that Washington may designate Iran's Revolutionary Guard Corps as a "terrorist organization," the US imposed sanctions against them on Friday over support of terrorism.

US Treasury Secretary Steven Mnuchin said the Revolutionary Guard Corps are involved in "much of the Iranian economy and those who transact with IRGC-controlled companies do that at a great risk." The US Treasury has also put on sanctions list four companies.

Here is the full Treasury Department statement on the new sanctions against Iran's IRGC. pic.twitter.com/L9JP9AAQWZ

World
Iranian Nuclear Deal Will Collapse if US Quits Agreement - Tehran
US President Donald Trump said in a speech on Friday that his administration will be imposing more sanctions on Iran in order to stop Tehran from financing terrorism.

"We will place additional sanctions on the regime to block their financing of terror," Trump stated.

Hours before that Iranian Foreign Ministry spokesman Bahram Qasemi said Tehran would "strongly respond to any action against its military forces."

Trump's administration has said it was planning to change Iran's "reckless" behavior, which represents one of the most dangerous threats to US interests and stability in the Middle East, according to the White House's material on this issue.