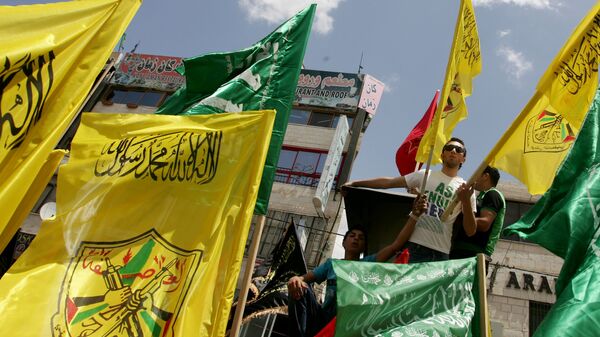 Rival Palestinian movements Hamas and Fatah began on Tuesday a new phase of reconciliation talks under the supervision of Egyptian authorities. The talks are aimed at resuming the work of Palestine’s national unity government in the Gaza Strip.

"The purpose of negotiations is to start implementing agreements to allow Palestine’s national unity government to perform its functions in the fields of economy and security in the Gaza Strip in the same way as it happens on the West Bank of the Jordan River," Fatah spokesman Osama Al-Qawasmi told Sputnik.

Moreover, he stressed that Gaza and the West Bank were "a single unit," noting that Fatah was aimed at having successful dialogue with Hamas. Al-Qawasmi added that Palestinian National Authority head Mahmoud Abbas urged parties to conflict to overcome all difficulties and achieve success.

Palestinian Fundamentalist Group Hamas Takes Steps to Rejoin Secular Rival Fatah
In a September joint statement, the special representatives of the Middle East Quartet, comprising the United Nations, the European Union, Russia and the United States, called for the reunification of the Palestinian parties controlling the Gaza Strip and the West Bank under the leadership of the Palestinian Authority. Meanwhile, earlier in October, Israeli Prime Minister Benjamin Netanyahu said that Israel would not accept any reconciliation deal between Hamas and Fatah without the dismantlement of the Hamas military wing and severance of connections with Iran.
Newsfeed
0
Access to the chat has been blocked for violating the rules . You will be able to participate again through:∞. If you do not agree with the blocking, please use the feedback form
The discussion is closed. You can participate in the discussion within 24 hours after the publication of the article.
To participate in the discussion
log in or register
loader
Chats
Заголовок открываемого материала