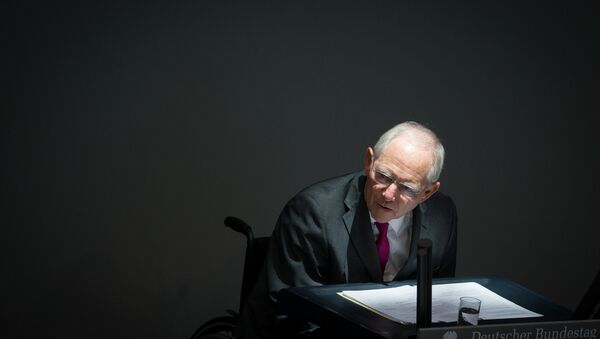 MOSCOW (Sputnik) — German Finance Minister Wolfgang Schaeuble warned of the danger of "financial bubbles," or unjustified overvaluation of goods or securities by the market players, and did not rule out new economic crises in Europe, in an interview published on Sunday.

"Economists all over the world are concerned about the increased risks arising from the accumulation of more and more liquidity and the growth of public and private debt. I myself am concerned about this, too," he told the Financial Times newspaper.

The finance minister warned that the world was in danger of "encouraging new bubbles to form."

Schaeuble positively assessed the "vigorous initiatives" of French President Emmanuel Macron on reforming the EU economy and advocated a policy of austerity.

"We have to ensure that we will be resilient enough if we ever face a new economic crisis. We won’t always have such positive economic times as we have now," the minister said.

According to Schaeuble, the United Kingdom's withdrawal from the European Union will show how "foolish" it was to listen to "demagogues who say… we’re paying too much for Europe."

“In that respect, they made a great contribution to European integration… Though in the short term that doesn’t really help Britain,” the minister added.

In late September, German Chancellor Angela Merkel's conservative bloc of the Christian Democratic Union (CDU) and its Bavarian sister party Christian Social Union (CSU) announced that Schaeuble had agreed to leave his post to become the President of the German Bundestag.