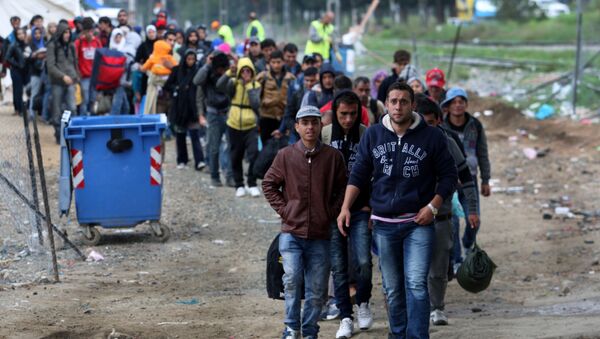 The ever-increasing number of refugees, who continue to arrive in Greece from Middle East war zones, may provoke the existing fraught situation in the country, political analyst Vassilis Fouskas told Sputnik.

"The reason behind this type of mass population shift is the American-led wars in Central Asia and the Middle East," he said.

Fouskas described conditions in the refugee camps as "appalling", adding that "the camps with the capacity of 1,000 people have [instead] 4,000 people" and that riots and outbursts of violence are not uncommon there.

As far as Greece is concerned, the growing inflow of migrants to the country may have serious repercussions, according to Fouskas.

"It definitely increases sentiments of xenophobia and boosts the popularity of the right-wing Golden Dawn party [in Greece]. This is pretty much the case across Europe, but in Greece it is even more pronounced because the country is kind of the first destination for refugees before they move northwards to the Balkans, Austria, Germany and Scandinavian countries," he said.

Fouskas expressed skepticism over the EU's drive to resettle 50,000 refugees within two years because of "unfavorable political conditions" and the right-wing movement’s expanding clout in Europe.

In this vein, he said in the next few months, similar resettlement programs may be reformed in order to make refugees return to their countries.

"When you have conditions of almost full employment in Europe, refugees and migrants will not be seen as a threat," Foucas said.

According to estimates by the Greek authorities, the number of refugees in Greece has more than doubled since the beginning of the summer
Over two hundred people, arriving by boat or on foot, are reportedly registered in Greece daily.

Renewed Refugee Returns to Greece Possible if Proper Reception Ensured – UNHCR
Europe has been experiencing the worst migration crisis in its history since 2015.

According to Refugee Situations Operational Portal, about 11,690 migrants have reached Greece's shores since the beginning of the year, with most of them coming from Syria and Iraq.