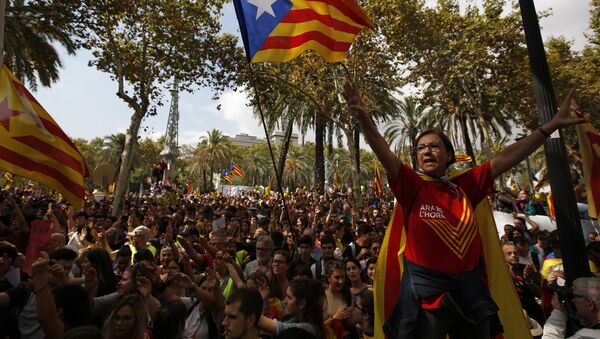 Marco Zanni, a member of the European Parliament from Italy, has told Sputnik that he expects the political demise of Spanish Prime Minister Mariano Rajoy and the destabilization of the European Union after Sunday's Catalan independence referendum.

MOSCOW (Sputnik) — According to the Catalan authorities, more than 90 percent of the more than 2 million votes cast backed independence, but Madrid considers the vote illegal. The population of Catalonia is 7.5 million, with some 5.4 million eligible voters.

Spain 'Likely to Face Big Problems' as Catalonia is Not Alone
The potential collapse of Rajoy’s government might bring eurosceptic parties to power, which would contribute to the overall tensions between EU supporters and detractors that already exist in many European countries, Zanni noted.

According to Zanni, it was difficult to assess what consequences the conflict between Madrid and Catalonia would have, but the prime minister's political career would likely suffer.

"I think that the most important political consequence of what happened… [on Sunday] in Catalonia will be the end of this minority government and the end of the political career of Rajoy," Zanni said.

The current Spanish government was formed following a prolonged deadlock, as neither Rajoy's People's Party (PP) nor the Spanish Socialist Workers' Party (PSOE) were able to form the government on their own.

"In fact, without the support of the Basque Indip. Party [Basque Nationalist Party (PNV)], he [Rajoy] will not be able to pass the 2018 budget in the parliament; that will trigger early elections in spring 2018 without a clear view on the result," Zanni said.

PNV and its five seats in the lower chamber of the parliament were crucial for the passage of the 2017 budget. However, Basques have also had several separatist movements in the past and a first-hand experience of the struggle for independence.

Zanni concluded by saying that the election campaign would be held in a "nervous" atmosphere.

EU Parliament Stops Short of Discussing Referendum in Catalonia - Lawmaker
On Monday, Rajoy met PSOE leader Pedro Sanchez, who urged the prime minister to hold talks about Catalan crisis with all parties seated in the parliament. The PSOE has also called on the government to begin negotiations with Carles Puigdemont, the head of the Catalan government.

Referendum May Cause Instability in EU

The European Union may have to deal with the ripple effect of the instability in Spain, according to the Italian politician.

"For the EU consequences could be two-folded: there could be a negative impact on future reforms of the EU and the eurozone (Rajoy has been one of the most important allies for EU institution and Brussels), and impact on the stability of Spain and Spanish government that could bring Podemos or other anti-EU parties to the power in Spain," Zanni explained.

The member of the European Parliament suggested that the positive impact of the Catalan referendum for the European Union might be "weaknesses of a nation state," setting up an opportunity to "create a more centralized and undemocratic EU."

Zanni added that the European Union and its member states would have to take a clearer stance on the issue if the Catalan government unilaterally declared its independence.

The European Commission said Monday it considered the vote illegal, but stressed that the issue was an internal one.

Catalan Public Organizations Call Upcoming Independence Vote Peaceful Revolution
According to Zanni, the European Commission should take action on Madrid's excessive use of force, "invoking a breach of Article 7 of the Treaty" on the European Union, which establishes the procedure for penalizing member states for rights violations.

Madrid sent security forces to Catalonia in an attempt to derail the referendum. According to the Catalan Health Department, 893 people had to seek medical treatment in clashes on the day of the referendum.