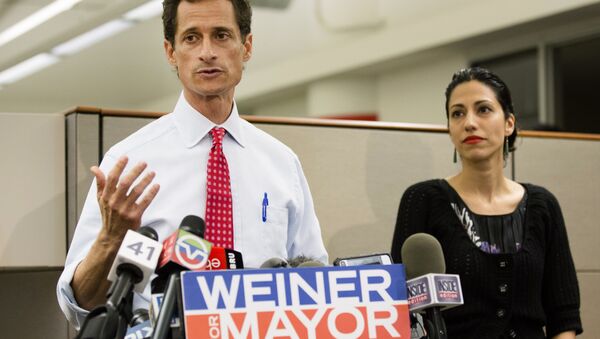 Anthony Weiner, the New York ex-congressman convicted of sexting a 15-year old, should be spared prison, as his alleged victim wanted her actions to sway 2016 elections result, among other things, Weiner’s lawyers say.

Anthony Weiner's lawyers requested no prison time for their client, calling his offense "far less egregious than any sexting case that has been prosecuted in this district," the US media reported Thursday.

While the attorneys do not deny Weiner's wrongdoings, they point out that according to the investigation, the alleged victim acted on her own agenda. According to a report by New York Times, the girl, whose name remains undisclosed, sought multiple personal profits from the situation.

Weiner Pleads Guilty to Sexting Teen, Wife Files For Divorce Same Day
The story was first revealed in a publication in the Daily Mail, for which the girl received a monetary reward of $30,000, having disclosed to the tabloid a number of screenshots of her texting with Weiner.

The lawyers also cite the defense memo in which the girl confessed to the investigators that she needed "material for a book — one she has now written and is shopping to publishers."

But that's not all: the girl allegedly told the investigators that she wanted her actions to sway the result of 2016 presidential election.

The memo says that the girl told the investigators that she "hoped somehow to influence the U.S. presidential election, in addition to securing personal profit," according to the New York Times.

Interestingly, New York Times point out that earlier in May that The New Yorker already reported that Sydney Leathers, Weiner's other affair, has been contacted by a 15-year old girl who had described her texting experience with Weiner.

According to the New Yorker, it was Leathers who suggested the teen turn to Daily Mail for the disclosure.

Anthony Weiner is a former husband of Huma Abedin, the allegedly closest aide to Hillary Clinton during her time in the State Department and 2016 presidential campaign. After the FBI started investigating Weiner's less-than-moral behavior, they found a large stash of emails that belonged to Abedin, the infamous "life insurance" package, that has had a substantial impact on Clinton's campaign and most likely contributed to her loss to Donald Trump.

Huma Abedin announced their divorce with Weiner in 2016 following the sexting allegations; she eventually filed for a divorce on May 19 2017.