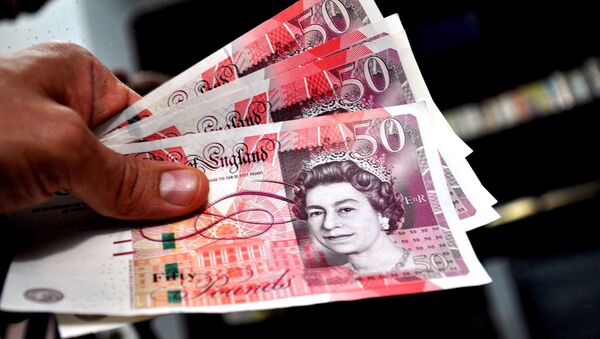 CC BY 2.0 / Victor / British pounds
Subscribe
UK Ministry of Defense compensation figures for the 2016-17 financial year have been released, mere days after other exposures indicated the MoD is prepared to go to extreme lengths to combat claims.

Statistics on compensation claims against the UK Ministry of Defense have been released, indicating total payments increased, while the total number of claims fell.

​In the financial year 2016-17, total payments made by the MoD for compensation claims and associated costs were some US$135 million (101 million pounds), including claimants' legal costs, a 13 percent year-on-year rise. The MoD's own legal costs were around US$21 million.

The highest value claim settled in 2016-17 was for catastrophic injuries sustained as a result of a road traffic accident involving a UK military vehicle, at US$7.34 billion.

The total number of new claims brought against the MoD was 4,390, a decrease of around 9 percent compared with 2015-16 — this included 1,317 service personnel employer's liability claims, with resultant costs running to US$80 million.

Moreover, 237 civilian employer liability claims were settled in 2016/17, with costs running to US$22.16 million. Public liability claims (including personal injury, property damage and miscellaneous financial losses) stood at 1,095, costing US$17 million in all (of which US$11 million was accounted for by motor claims).

When compensation claims are received by the MoD, the primary consideration is (perhaps predictably) whether  the Ministry of Defense has a legal liability to pay compensation.

The amount of compensation paid is said to be determined by common law principles, which take account such factors as individual pain and suffering, degree of injury, property losses, past and future financial losses and level of care required. The majority of cases are settled via negotiation, saving parties involved the additional costs of court appearances — and the MoD from public embarrassment.

However, freedom of information requests filed by campaigner Omran Belhadi indicate the MoD is willing and able to expend vast sums on fighting compensation claims. In particular, officials spent over US$1 million on lawyer fees unsuccessfully trying to deny responsibility for the deaths of soldiers killed in lightly armored Snatch Land Rovers in Afghanistan and Iraq.

Here's what @DefenceHQ paid to stop bereaved families of soldiers from seeking justice for the death of their loved ones pic.twitter.com/h95nXmDDuJ

​Lawyers argued the MoD did not have a duty of care to those killed using the vehicles, which were nicknamed "mobile coffins" in Northern Ireland, due to their vulnerability to bombs.

Families whose children died in Snatch Land Rovers brought compensation claims against the government under legislation covering negligence and human rights, and in 2013, the Supreme Court found, based on human rights legislation, the army did have a duty of care to soldiers killed in combat.

One to remember when the Gov't says: "there's not enough money for legal aid." They will always find the ££ to wriggle out of their duties

​Of that sum, around US$226,290 was spent on government lawyers and barristers on a case brought by Sue Smith, whose son, Private Phillip Hewett, 21, died in July 2005 after the Snatch Land Rover he was traveling in was blown up in Amara, southeast Iraq.

"This was a staggering waste of taxpayers' money. Thanks to the courage of the bereaved families — and reliance on the Human Rights Act — the government was compelled to do what is right and apologize. It is a disgrace that it took 12 years to get here. These cases highlight how much we need the Human Rights Act. Justice could not be achieved without it. Any plans to repeal the Act must be permanently abandoned," Belhadi commented.

Moving forward, the MoD plans to introduce a new compensation scheme that will do away with the need to prove negligence and divert cases away from the courts, proposals which have caused misgivings among service families who have campaigned to reveal flaws in army equipment. The department is also planning to suspend human rights legislation in future wars.

The Law Society, which represents solicitors in England and Wales, is opposing the scheme.