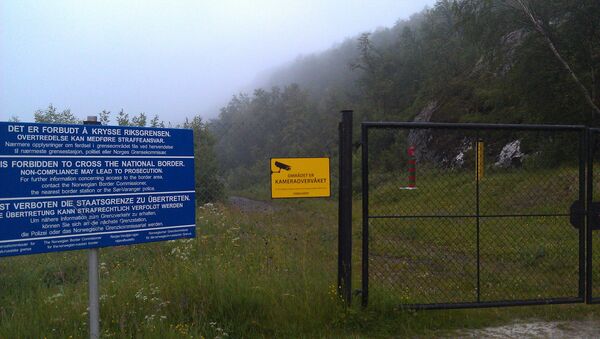 With the general election approaching, a Norwegian party is hoping to harvest more votes with its pledge to dismantle the controversial border fence with Russia, which has been severely slammed by locals as a symbolic revival of Cold War-era sentiments.

The Socialist Left Party (SV) promised to tear down the highly controversial border fence at Storskog border crossing, if it makes it to the government after Monday's general election. Additionally, the party's representative from the border county of Finnmark, which has traditionally enjoyed amicable relations with Russia, lashed out against the government for prioritizing the fence above a new border station.

Despite being only 200 meters long, the 3.5-meter-high steel fence fetched a price tag of $500,000 and provoked strong reactions on both sides of the Norwegian-Russian border last year. Back then, many Norwegians argued it hampered bilateral cooperation, disrupted the sense of neighborliness and sent an overall wrong signal. SV representative Kirsti Bergstø plans to rectify the mistake and dismantle the fence.

"The present-day border station lacks basic facilities and is dimensioned for a far lower number of travelers than we have today," Kirsti Bergstø told Norwegian national broadcaster NRK, stressing the importance of this measure both in everyday life and in case of emergencies.

Northern Norwegians Laughing at Oslo's Fear of Russia
The traffic over Schengen's northernmost border between Norway's Finnmark Country and Russia's Murmansk region has been rising for several years, which increases the pressure on the facilities currently in use. A new border station at Storskog has long been on the local agenda, yet has never caught the government's attention, Bergstø claimed.

"The only thing the government has done for the area here is building a fence. That fence should be demolished, and what we need is a new border station of a more civilian nature," Bergstø argued, demanding government funds.

Norway's European Minister and Conservative MP Frank Bakke-Jensen strenuously rejected the criticism from Bergstø, emphasizing that the government sees the need for a new border station. However, Bakke-Jensen refused to comment on whether the construction will be prioritized, as money has already been earmarked on rescue helicopters, police helicopters and police training.

Unnerved Norwegians Ask Gov't to 'Do Something' About Anti-Russian Sanctions
The divisive border fence was set up in 2016 under the pretext of improving security. At the height of the migrant crisis of 2015, around 5,500 asylum seekers, predominantly from the Middle East, arrived to Norway via Russia, using the so-called Arctic way as a cheaper and safer alternative to the established Mediterranean route. All of these border crossings took place at Storskog.

Following decisive actions on Russia's part the influx has subsequently died down. The fence, however, has been slammed as a mockery of security, as refugees who managed to make it over the Arctic Circle from war-ravaged places could easily sidestep the 200-meter-long fence by using virtually any spot on Norway's 196-kilometer-long national border with Russia.

Regardless of the recent cooling in relations between Oslo and Moscow, interactions between Russians and Norwegians remain heated as ever. In recent years, cross-border cooperation has been boosted by a 2010 agreement that allows residents in the border area to travel across the border without a visa. This year alone, 178,830 border crossings have been made at Storskog, compared with roughly 250,000 in 2016.

Not yet Russia, but quite close… #Storskog #Kirkenes pic.twitter.com/bP0BfrOQNl