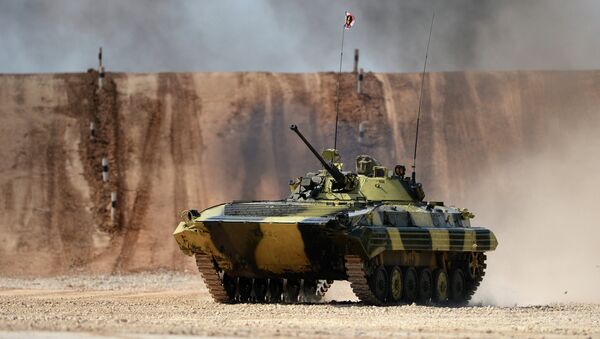 The partnership has been struck in anticipation of a mega project worth billions of dollars for upgrading hundreds of Russian-made BMP-2 infantry combat vehicles of the Indian armed forces.

New Delhi (Sputnik) — Indian private firm Ashok Leyland Defense System (ALDS) has partnered with Russia's state-owned arms exporter Rosoboronexport and ELCOM Group of India to provide a local solution to the tracked vehicle upgrade program of the Indian armed forces. The partnership has been struck in accordance with India's new strategic partnership model for defense purchases. The partners are now hoping to bag a mega project worth billions of dollars for upgrading the Russian made BMP-2- a second-generation, amphibious infantry combat vehicle.

"We are happy that Rosoboronexport has chosen ALDS & ELCOM as its partners in India to address the Tracked Vehicle Upgrade Programs of Indian Armed Forces. The issue of indigenization and availability of service and parts, which has been an area of concern, will now be addressed as ALDS and ELCOM will be responsible for manufacturing in India and also providing life cycle support," Amandeep Singh, Head (Defense), Ashok Leyland said.

"Whatever mobility solution is required for the military combat vehicles, we will be part of that," An ALDS official told Sputnik citing the company's interest in the up-gradation project.

Presently, the Indian Army has approximately two BMP-2 vehicles out of which more than a thousand are due for overhaul and up-gradation since 2015. Earlier this year, India had nominated state-owned firms BEL and Ordnance Factory Board to carry out mid-life 263 BMP-2. The contract for upgrading the remaining vehicles are yet to be awarded. The tracked vehicle upgrade program calls for localization of the up-gradation project, therefore, a number of Indian firms are hoping to grab the contract by forging partnerships with global exporters.

The contract for upgrading 263 BMP-2 Infantry Combat Vehicles was awarded at an estimated cost of $375 million wherein BEL and Ordnance Factory Board will equip the vehicles with electro-optic fire control system to boost surveillance capabilities and advanced thermal imaging sights for night-fighting capabilities.

According to sources, the up-gradation of BMP-2 Infantry Combat Vehicles (ICV) will include increasing the mobility with change in engine, transmission, gear and suspension system, cooling system, weapons system and ammunition, gunner sighting (day and night), commander sighting, FCS, ATGM, level of protection, and maintainability.

Ashok Leyland will also compete for the armored fighting vehicle project which will be manufactured in India under the newly announced strategic partnership model.