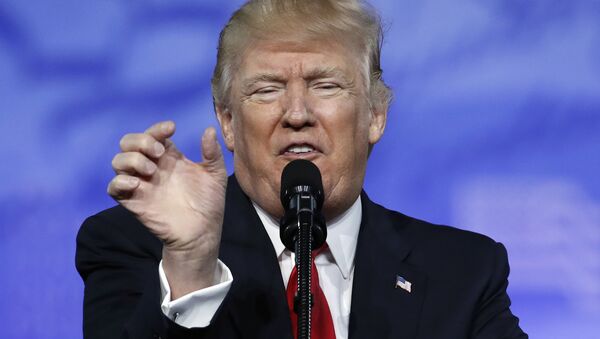 © AP Photo / Alex Brandon
Subscribe
International
India
Africa
According to a US congressman, the termination of the Deferred Action for Childhood Arrivals by Donald Trump will lead to a sharp divide within the Republican Party.

WASHINGTON (Sputnik) — If US President Donald Trump decides to terminate the Deferred Action for Childhood Arrivals (DACA) program with a six-month delay, it will cause a sharp divide within the Republican Party, US Congressman Henry Cuellar said in an interview on Tuesday.

"I think what's going to happen if the president delays this for six months, it's going to make it difficult — and I hope we can pass the DREAM Act," Cuellar told CNN. "But it's going to cause, in my opinion, a civil war within the Republican Party."

The lawmaker pointed out that the immigration reform is one of the most emotional issues in the US Congress, and that Republicans are polarized over the right course of action.

Cuellar noted that ending DACA would be a mistake that would impact the US economy and leave the country without 800,000 well-educated youngsters.

Trump Allows Japan, S Korea to Buy Increased Amounts of Arms From US
Trump is expected to announce further actions on DACA, a program protecting from deportation undocumented immigrants who arrived in the country as children, later on Tuesday.

Trump's predecessor, Barack Obama, established the DACA program via an executive order in 2012, allowing immigrants who entered the country illegally as minors to receive renewable two-year deferrals on deportation proceedings, as well as permits to work in the United States.

It remains unclear whether Trump will discontinue the program, but lawmakers and media speculate that the White House will terminate it.