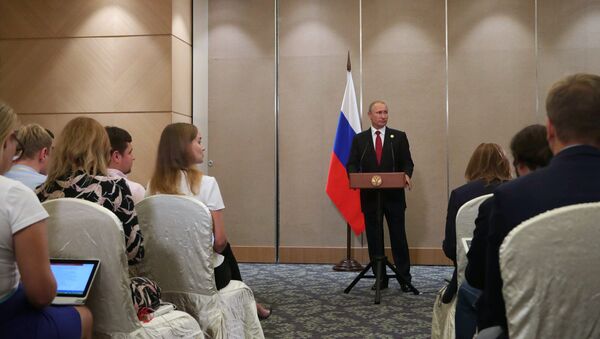 While commenting on the situation around the recent nuclear tests performed by North Korea, the Russian president said that only dialogue with the country could solve the issue. Putin said that sanctions would never make North Korea abandon its nuclear program.

"It is necessary to push the issue to a dialogue between all interested parties. All participants in this process, including North Korea, should not have any of these considerations that are associated with the threat of destruction, but, on the contrary, all parties to the conflict should get on the path of cooperation," Putin told reporters.

On diplomatic issue with the US

The Russian leader said that Russia reserved the right to make a decision about reducing the number of employees of US diplomats in Russia by another 155 people for full parity.

Vladimir Putin said that Russia would file a lawsuit with a US court regarding the situation with Russian diplomatic property in the United States.

On the upcoming presidential election in Russia

Russian President Vladimir Putin, responding to a question about running in the country's presidential elections, said Tuesday that those wishing to run would announce it in due time.

"At a time envisioned by the law, those who want to participate in the next presidential election of the Russian Federation, I am convinced, will announce that," Putin told reporters after attending the BRICS summit in China.

The Russian leader also said that hadn't heard about reports on a list of female candidates for the upcoming elections, adding that anyone could run for the office.

"Anyone, in accordance with the existing laws, has the right to stand as a candidate if the requirements of the legislation are met. I repeat, within the framework of the existing legislation," Putin told reporters at the press conference after the BRICS summit.