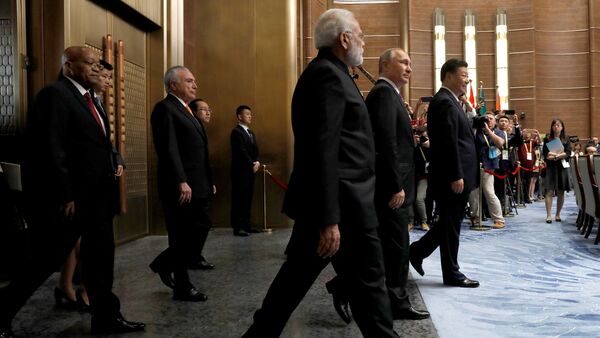 In his address at the plenary session of the BRICS summit, Indian Prime Minister Narendra Modi emphatically highlighted the need for countering western rating institutions by establishing a separate rating agency for developing countries, particularly those of the BRICS block. He said such an agency would serve the financial needs of sovereign and corporate entities of developing nations.

"Our central banks must further strengthen their capabilities and promote cooperation between the Contingent Reserve Arrangement and the IMF (International Monetary Fund)," the Indian Prime Minister said, urging the early creation of the BRICS rating agency.

Modi was the first to pitch for the idea of having such an agency for the BRICS grouping which can remove impediments to the emerging market economies posed by the present credit rating agency market, which is dominated by S&P, Moody's and Fitch. These three western rating agencies hold over 90 per cent of the sovereign rating market now.

India's concerns over the methodology adopted by rating agencies have been shared by other BRICS member countries, including Russia, China, South Africa and Brazil.

On Sunday, President of the Russian Chamber of Commerce and Industry (CCI) Sergey Katyrin confirmed that the Brics nations "have made remarkable progress" on the idea of establishing a joint credit agency.

"We've had a very serious talk on a BRICS credit rating agency, the topic is important for each country both in general and in terms of the BRICS bank, as they are also pursuing a strong rating, [necessary] for work," Sputnik quoted Katyrin said on the sidelines of the BRICS Business Forum, adding that "there is progress and understanding… we have made remarkable progress in this area."

India's Economic Survey 2017-18 highlighted contrasting experiences over ratings assigned by these agencies in relation to India and China in the last two years. The Modi government has maintained that the agencies have ignored the steady decline in India's debt burden and fiscal strength in recent years.

000000
Popular comments
Being Independence from Western in all Aspect is Import and Basic requirement for surviving the Human being in the world. It will not happen with in few days, but we have to Focus on it and work hard for it.