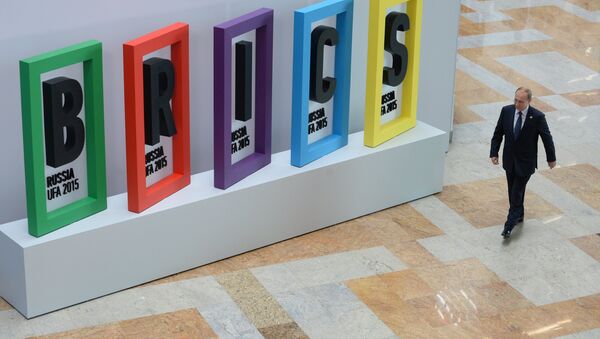 © Sputnik / Iliya Pitalev
/
Go to the photo bank
Subscribe
Russia calls for strengthening the cooperation between BRICS states in political, economic and humanitarian spheres, according to Russian President Vladimir Putin.

"Russia stands for strengthening the BRICS countries’ partnership in politics, the economy, culture and other areas. We are ready to continue working jointly with our colleagues to promote democracy and to strengthen the healthy elements of international relations based firmly on international law," Putin said in an article published by leading media of BRICS states on the threshold of the BRICS summit.

The president expressed his assurance that the coming BRICS summit would promote the cooperation between BRICS states and help to find solutions to the modern challenges.

Russian President has proposed that small and medium-sized enterprises in the five BRICS emerging economies integrate their online resources to boost cooperation.

"Another priority is to build up our cooperation in the area of small and medium-sized enterprises (SME). We believe that we should integrate the national SMEs’ online resources for placing crosslinks and other commercial information and for exchanging data on reliable partners," he wrote.

Putin said a Russia-drafted BRICS Strategy for Economic Partnership had been successfully implemented in recent years. He added he expected more efforts on reenergizing trade and investment across BRICS nations to be made at next week’s summit in the Chinese city of Xiamen.

"We propose joining our efforts to create a legal basis for cooperation and subsequently to draft and adopt universal rules of responsible behaviour of states in this sphere. A major step towards this goal would be the signing of an intergovernmental BRICS agreement on international information security," he wrote.

"I am convinced that the Xiamen Summit will help invigorate our countries’ efforts towards finding solutions to the challenges of the 21st century and will propel cooperation within BRICS to a higher level," Putin said.

The summit of BRICS states – Brazil, Russia, India, China and South Africa – will be held on September 3-5 in the southeastern Chinese city of Xiamen.