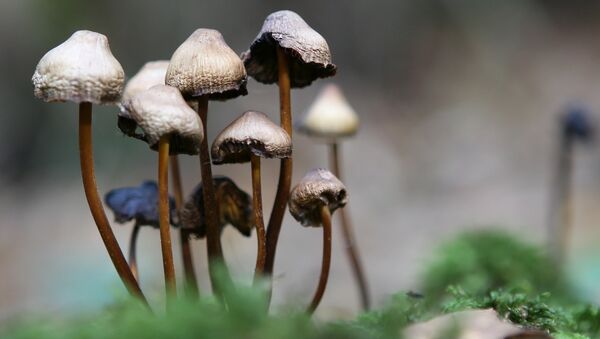 CC0 / Pixabay /
Subscribe
While California wasn't the first or only state to legalize marijuana, it may end up becoming the first to approve psychedelic mushrooms, thanks to Kevin Saunders, who filed an initiative to do just that Friday.

Submitted to the office of California Attorney General Xavier Becerra, the newly proposed measure calls for the psilocybin compound of magic mushrooms to be decriminalized so that anyone 21 or over won't be penalized for the "possession, sale, transport and cultivation" of the substance.

According to Saunders, psychedelic mushrooms have the power to help drug addicts in the same way it allowed him to kick his heroin addiction roughly 15 years ago.

"I think we're seeing something that could literally heal our brothers and sisters," the former Marina mayoral candidate told the LA Times. "We're talking about real cutting-edge stuff."

Though Saunders will need to collect at least 365,880 valid voter signatures within the next 180 days to get the measure to qualify for the 2018 ballot, he is optimistic.

"What I want to do is take the shackles off. I want to have an adult conversation," the Golden State resident told the Sacramento Bee, insisting Cali voters were ready for the change. "Not only are the soccer moms high now, but some of them are taking mushrooms."

Saunders plans on hiring organizers from college campuses and soliciting donations from Hollywood elites and Silicon Valley entrepreneurs to get the ball rolling on the time-sensitive initiative.

"It's a natural progression from marijuana legalization," Saunders said.

Though psilocybin is considered a Schedule I drug by the federal government, two separate studies conducted by the Department of Psychiatry at the University of New York and Johns Hopkins University School of Medicine have shown that the substance helps to reduce anxiety and depression.

Not to be outdone, popular club drug, MDMA has proven effective in helping people suffering from post-traumatic stress disorder. According to a study by the Multidisciplinary Association for Psychedelic Studies, 61 percent of participants were cured of their PTSD symptoms after sitting through three sessions of ecstasy-assisted talk therapy.

Scientists are also currently studying how psychedelics like mushrooms could help to tackle alcoholism and be used to counter the raging opioid epidemic.

"For those of us who work in addiction, our existing treatments are not impressive, they're disappointing, and at a minimum, why not give this a try?" Peter Hendricks, an addiction psychologist at the University of Alabama at Birmingham, told Motherboard.

Though Hendricks is just in the beginning stages of clinical trials, only time will tell if California soccer moms are really onboard with Sauders' trip. Er, journey.