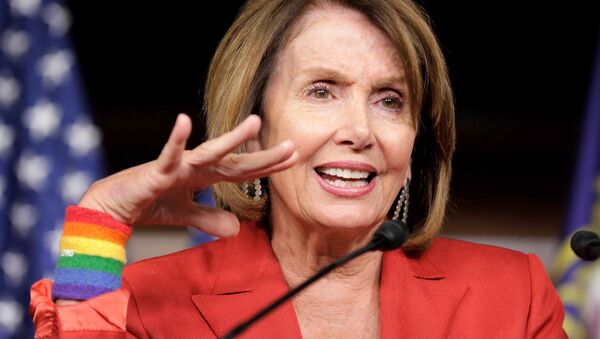 US democracy has no room for the kind of incitement to violence shown by Antifa protesters over the weekend in Berkeley, California, according to House Minority Leader Nancy Pelosi.

Trump Should Fire Bannon if Sincere About Rejecting White Supremacists - Pelosi
WASHINGTON (Sputnik) — US democracy has no room for the kind of incitement to violence shown by Antifa protesters over the weekend in Berkeley, California, House of Representatives Minority Leader Nancy Pelosi said.

"Our democracy has no room for inciting violence or endangering the public, no matter the ideology of those who commit such acts. The violent actions of people calling themselves Antifa in Berkeley this weekend deserve unequivocal condemnation, and the perpetrators should be arrested and prosecuted," Pelosi said in a statement on Tuesday.

Antifa is a militant left-wing political movement of self-styled anti-fascists. The group took part in protests that turned violent in Charlottesville, Virginia, on August 12, as well as largely peaceful demonstrations in Boston, Massachusetts, on August 18.

Scores of Antifa activists wearing black clothing and face masks stormed a demonstration in Berkeley on Sunday and attacked supporters of President Donald Trump, according to media reports.

Pelosi said all people in California and the United States have the constitutional right to peaceful dissent and free speech.

"Non-violence is fundamental to that right," she added.

Sunday's demonstration was held in protest against a planned right-wing rally, which was called off over fears of violent clashes.