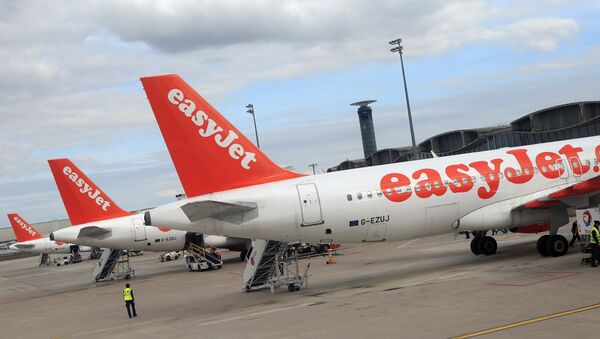 MOSCOW (Sputnik) — The company canceled a flight from London Gatwick Airport to Belfast on June 23. The requests for compensations that followed have been declined by the company, which cited an air traffic control strike as the reason.

However, some passengers claimed they heard technical personnel and company staff talking about an engine that was not working, The Sunday Times newspaper reported.

My flight from Gatwick to belfast 24/06/17 @easyJet was cancelled the Captain told us it was due to H&S issue and he was refusing to fly!

​In line with EU regulations, if a flight is canceled because of technical problems on board, the responsible company has to pay 250 euros (about $300) to every passenger in compensation. If a flight has been canceled due to reasons out of company's control, then the company has the right not to pay out the compensations.

@easyJet My flight to Belfast tonight from Gatwick has just been cancelled and you haven't even provided a reason. Terrible service.

​Following a request by the newspaper, EasyJet admitted that there was no strike on that day, saying that it failed to identify the right cause. The company reportedly promised to pay out the compensations in full.