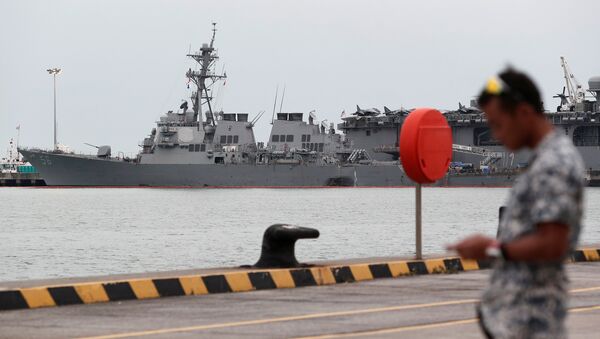 © REUTERS / Calvin Wong
Subscribe
International
India
Africa
According to Chinese Foreign Ministry spokeswoman, China is hopeful that the US will show a more responsible and serious attitude toward US Navy operations.

BEIJING (Sputnik) – China is hopeful that the United States will show a more responsible and serious attitude toward US Navy operations, in light of the two fatal collisions involving US destroyers that happened over the last several months, Chinese Foreign Ministry Spokeswoman Hua Chunying said Thursday.

"Lately, we have noted a series of reports in the media, many attentively follow actions and operations of the United States, which can potentially pose a serious threat in the waters [where the operations take place]. We hope that the United States will take this issue seriously," Hua said.

US Divers Search for Ten Missing Warship Sailors Amid Collision - Navy
Commenting on the recent dismissal of Vice Adm. Joseph Aucoin, the commander of US Seventh Fleet, following several deadly incidents involving the fleet's destroyers, Chinese Foreign Ministry's spokeswoman said that "this issue is an exclusive concern of the United States."

On Monday, USS John S. McCain collided with the Alnic MC oil tanker near the Malacca strait in Singapore's waters. The crash left five US sailors injured, one dead and nine more missing. US Navy confirmed that divers had discovered human remains inside the flooded compartments of the vessel.