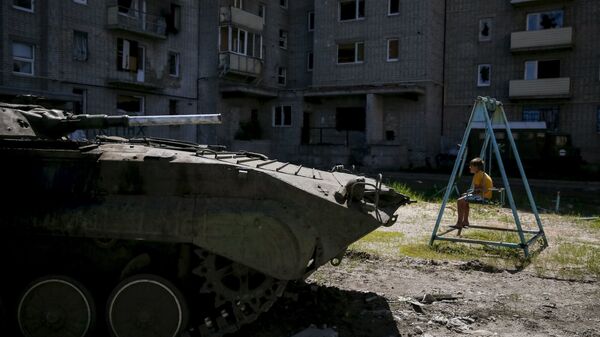 © REUTERS / Gleb Garanich
Subscribe
International
India
Africa
German government spokesman Steffen Seibert said that the leaders of the Normandy Four held a phone conversation on Tuesday, during which they expressed support for a regular truce in Donbass.

During the phone talks, which involved Russian President Vladimir Putin, French President Emmanuel Macron, German Chancellor Angela Merkel and Ukrainian President Petro Poroshenko, the leaders "expressed their clear support for the decision of the Trilateral Contact Group to declare truce on the occasion of the academic year, scheduled for August 23," the statement said.

"The heads of state and government expressed the hope that this truce would lead to a steady improvement in the security situation in the interests of schoolchildren and the entire civilian population in Donbass," it said.

The statement also said the Normandy Four leaders agreed to personally work on further implementation of the Minsk agreements on the basis of a stable truce.