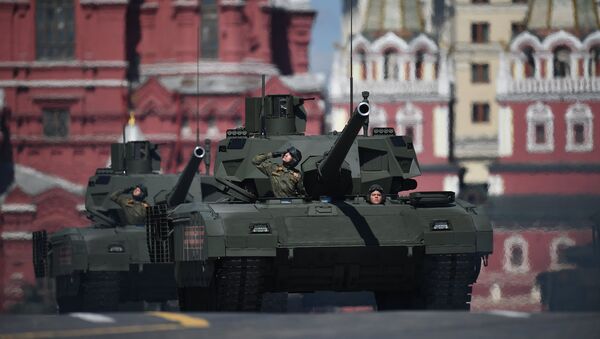 Russia’s Armata tanks and armored vehicles are to receive mobile power stations to ensure immediate and smooth engine starts at temperatures of even minus 50 degrees Celsius. In addition they will receive stable turret movement, weapons stabilization and fire control.

All this will be done by super-condensers that immediately accumulate huge amounts of electricity and keep onboard systems running before the main engine even kicks in.

The system is similar to “start-stop” technology that many car owners now go for and which ensures fuel-saving automatic switch-off and restart of a car engine. The super-conductor makes up for the loss of power caused by multiple engine starts and extends battery life.

T-14 Armata: The Russian Tank That Changed the Arms Market
The super-condensers have been developed by the Renova Group of Companies.

In an interview with Izvestia, Milkhail Livshits, the head of Revova’s department of high-technology asset management, said that they had offered their super-condenser, currently installed on electric buses and railway engines, as standard equipment for Armata tanks and armored vehicles.

“We tested the super-condenser to start the engine of a tank that had spent several days in very cold weather so its batteries were dead. We still managed to rev it up with the help of a mobile power station built around a super-condenser the size of briefcase,” Livshits said.

He added that the use of super-condensers will free up a lot of space inside the tank’s battery compartment for additional payload.

Armored technology expert Sergei Suvorov told Izvestia that the problem of space saving has always been a big priority for tank designers because it makes the tank lighter and allows for the use of additional fuel and ammunition.

“Right now tank designers are working to make their vehicles as fire-proof a possible. As a result, they are getting rid of the hydraulic system of weapons stabilization and turret movement. It is unreliable and in case of a hit, it can cause the turret to blow up,” Suvorov said.

He added that the Americans have their hydraulic system placed outside the tank, right behind the turret making them vulnerable to machine gun fire. The system becomes punctured, oil flows out and gets into the engine and it shuts off.

Russia's New Armata Tank Leaves Behind US, Israeli Analogues, Deputy PM Says
“As a result, you have a tank being destroyed by a machine gun,” Suvorov noted.

The use of super-condensers will make it possible to replace the hydraulic system with a magnetic one thus ensuring quick turret rotation and activation of the fire-control system even before the main engine roars into action.

According to Western experts, the state-of-the-art Armata tanks and heavy BMP T-15 armored vehicles, designed for use in the Arctic, the Middle East and Europe, have a better chance of surviving in battle than their Western European and US counterparts.

The T-14 Armata main battle tank, unveiled during the Victory Day parade on May 9, 2015, is operated by a three-person crew, sitting in an armored capsule at the front, while its turret is unmanned.

Currently, the tank sports the standard 125-mm cannon, but, designers say, it could be easily outfitted with a much more powerful 152 —mm cannon in the future.