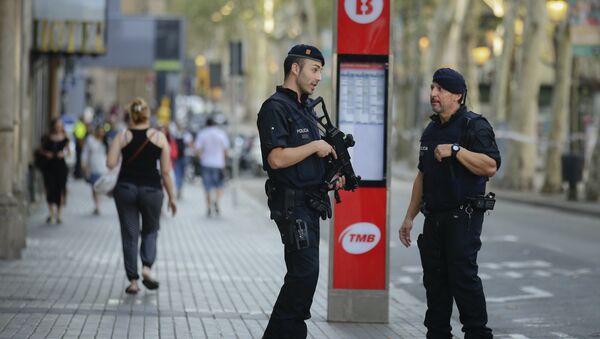 Abdel-Baki es-Sati, an imam from the Catalan town of Ripoll suspected by the Spanish authorities of masterminding Thursday's terror acts in Catalionia, spent thee months in the Belgian city of Vilvoorde in 2016, the city's Mayor Hans Bonte said Sunday.

MOSCOW (Sputnik) — Belgian law enforcement was informed about es-Sati by the imam of one of the local mosques and collected information about es-Sati, who was not known as a radicalized person, Bonte added.

"[Es-Sati] was here from January to March last year," Bonte said, as quoted by the Belgian VRT broadcaster.

According to the broadcaster, Bonte had no residence permit and was looking for a job at local mosques in order to stay in Belgium. It is still unknown if Belgian terror suspects have contacted es-Sati.

Barcelona Terror Cell Initially Planned Attack at Sagrada Familia Cathedral
On Saturday, the country’s authorities raided the house of es-Sati in Ripoll. Es-Sati is considered by the authorities as one of those killed in the blast of a house in the southern town of Alcanar earlier in the week where another attack with the use of explosives had allegedly been planned by the terrorists.

On Thursday, a van hit pedestrians in the center of Barcelona, killing over a dozen and injuring over 130 others. Hours after the incident, another vehicle attack took place in Catalonia's southern town of Cambrils. In the attack, a police officer and six civilians were injured and at least one of them died later. The responsibility for the van attack in Barcelona was reportedly claimed by Daesh terror group (IS, outlawed in Russia).