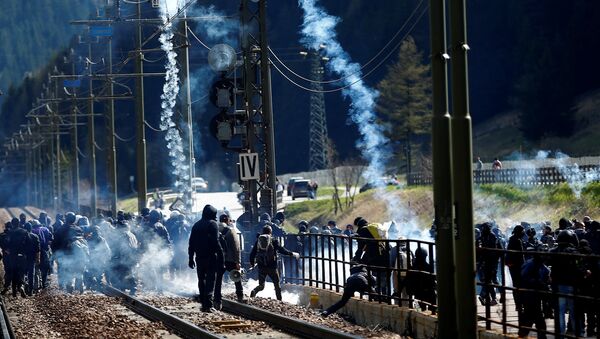 Vienna has announced that they are moving troops to their border with Italy to cut down on the tide of illegal migrants crossing into Austria aboard freight wagons.

Seventy troops in total have been moved to the Brenner Pass, a mountain pass through the Alps mountain range that forms the border between Austria and Italy. Helmut Tomac, a senior Austrian police official, said in a statement that Vienna is prepared to send armored military vehicles as well, but only if the situation worsens.

The years 2016 and 2017 have seen tens of thousands of people fleeing the Libyan Civil War enter Italy every month. The United Nations reported that 80,000 refugees entered Italy in the first half of 2017, a 14 percent increase from 2016. This consists of 85 percent of all new refugees arriving in Europe in 2017.

Italy has pled for its fellows in the EU to help share the refugee burden through a relocation plan, but Austria and other nations such as Hungary, Poland and the Czech Republic have refused. In July, Austria threatened to close the Brenner Pass if Rome were to give migrants humanitarian visas that would allow them free travel throughout Europe. "Rescue in the Mediterranean cannot be a one-way ticket to central Europe," said Austrian Foreign Minister Sebastian Kurz.

"We shall not accept lessons and still less threats such as those we have heard from our neighbors in recent days," said Italian Prime Minister Paolo Gentiloni in response to the Austrian "threat." "We are doing our duty and expect the whole of Europe to do the same alongside Italy."

Across the border in Austria, 16,000 people have applied for asylum thus far in 2017, despite the nation having partially-closed borders since November 2015, with only those with an immediate relative already in Austria to be considered for asylum.

In a letter to the European Commission, Gentiloni called for "a greater European effort to face the migrant phenomenon which has a structural dimension and concerns the entire European Union," reported Italian news agency ANSA.

"Italy is not sparing any energy to respond, with a national mobilization, to the challenges" of the migrant crisis, wrote Gentiloni. "We appreciate the European Commission's determination to be at Italy's side [on migrants] and maintain a constant dialogue with the Italian authorities."