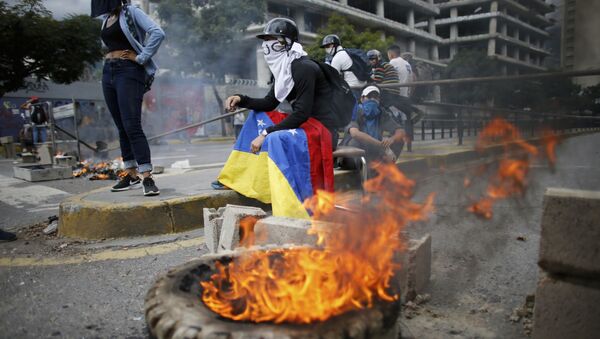 An armed right-wing opposition group in Venezuela attempted to carry out an attack on a military base on Monday that was thwarted by the government: the latest attempt by elements who oppose President Nicolas Maduro to destabilize the country following the recent constituent assembly vote in July 30, supporters of the country’s government say.

Radio Sputnik’s Loud and Clear speaks with Venezuela-based activist Lucas Koerner, a writer for VenezuelaAnalysis.com, about the attack and how the US government and media claim to want stability in Caracas but in reality seek the ouster of a democratically elected government.

​Days before Venezuela’s constituent assembly, US Vice President Mike Pence made a statement saying, "The United States stands with the Venezuelan people, and we call for the full and unconditional release of all political prisoners in Venezuela, free and fair elections, restoration of the national assembly, and respect for human rights in Venezuela. Our thoughts and prayers reside with all of those who have suffered during venezuela’s crisis. The United States urges the reestablishment of democracy in Venezuela and the restoration of the prosperity that Venezuelans have fought so hard to achieve."

Koerner told Loud and Clear, "I think it’s interesting that these comments about 'restoring constitutional order' and 'restoring democracy' come right after Venezuela celebrated an extremely high turnout election on July 30 in which you had over eight million people throughout the country come out and vote in the national constituent assembly election in the midst of what can only be described as a campaign of opposition violence, destabilization and terror."

He pointed out that people in different parts of the country crossed rivers and endured other difficult circumstances to cast their vote.

"This is clearly an exemplary exercise of democracy," he said, "and the United States responds, of course, by slapping Nicolas Maduro with sanctions and adding him to the list of authoritarian leaders who are also being targeted for regime change."

He said that mainstream media outlets have whitewashed violent right-wing demonstrators as "peaceful protesters" because they identify with their upper-middle class sensibilities, and therefore paint the Maduro government as repressive and the recent vote as illegitimate.

"There’s no doubt that the constituent assembly has immense legitimacy … The vast majority of people participated in the elections, [and] they see the ball as in the government’s court right now," Koerner explained, analyzing what Venezuelans will be looking for following the vote. "They came out and they supported their state in the midst of right-wing violence and terror, they’re now expecting this new body to take substantive economic measures to resolve the crisis," of what he called “politically driven inflation."

He suggested that the government must take "active measures to address this in terms of trying to fix the extremely broken system of exchange controls and currency regulations," and work to democratize ownership of transnational corporations and transfer their unproductive assets of "land and factories to workers and communities."

"This is what the grassroots are calling for," he said.