'This is No Liberation': US Coalition 'Lays Waste' to Raqqa 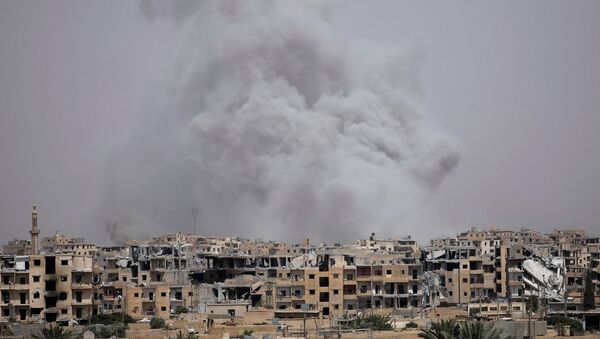 While US-coalition forces continue to pound the Syrian city of Raqqa, the so-called capital of Daesh (ISIL/ISIS), a notable Syrian MP accused them of waging a war against civilians instead of terrorists.

After Bombing Raqqa Hospital, Coalition Airstrikes Reportedly Kill 43 Civilians
Omar al-Asad, deputy head of Syrian parliament committee on foreign affairs, told Sputnik Arabic that the US-led coalition forces had leveled entire districts in the city of Raqqa, while portraying these "criminal acts" that claim the lives of innocent civilians and children as the war against Daesh.

"The US kills ordinary Syrians while shying away from Daesh forces. The Raqqa operation should be described as sabotage and laying waste, not as liberation," al-Asad said.

The Syrian MP urged the global community to help stop the coalition strikes that are wreaking havoc upon the city infrastructure in Raqqa.

For example, earlier this month Damascus accused the US-led coalition forces of conducting an airstrike against a hospital in Raqqa using phosphorous bombs. Earlier in June the coalition admitted that its forces had used white phosphorus munitions during the Raqqa offensive.

"The Americans would’ve liberated Raqqa a long time ago if they wanted; they know every patch of terrain in the city thanks to their satellites. The Syrian army however not only wants to fight against terrorists, it does actually fight them. For example, a few days ago the town of al-Sukhnah was liberated," he said.

Omar al-Asad also accused the US of perpetrating crimes against civilians in the provinces of Aleppo, Deir ez-Zor and Raqqa on a daily basis. He pointed out that the coalition does not offer any confirmation of its alleged successes, such as the exact number of enemy troops killed and military hardware destroyed.

US-led coalition forces are currently conducting airstrikes and artillery strikes against Daesh assets in both Syria and Iraq. It should be noted however that the coalition’s operations in Syria have not approved by the Syrian government or even by the UN Security Council.