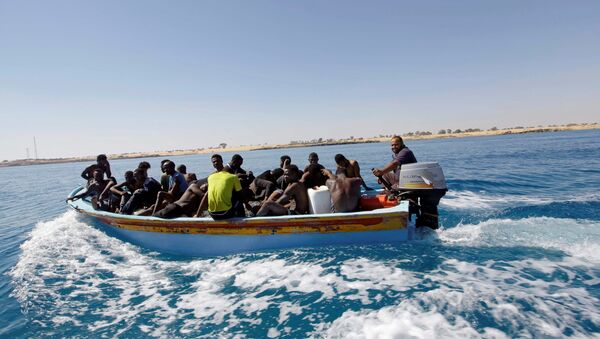 The EU should elaborate safe alternatives to dangerous and often life-threatening trips via sea for asylum seekers to reach Europe.

EU Migrants Under 30 May Get 2-Year UK Visas After Brexit
MOSCOW (Sputnik) — The European Union should work out safe alternatives to dangerous and often life-threatening trips via sea, taken by asylum seekers to reach Europe, in order to put an end to tragic deaths of migrants in the Mediterranean, Tommaso Fabbri, head of mission for Medecins Sans Frontieres (MSF, or Doctors Without Borders) in Italy, told Sputnik.

"The only way to stop this tragedy is to create safe and legal alternatives to these dangerous journeys. Resettlement schemes, family reunification, issuing of humanitarian visas, lifting of visa restrictions, and providing work or study permits are a few examples," Fabbri said.

He noted that such extreme measures as closure of borders, pushes migrants to look for other — and often more dangerous — ways to flee their home countries.

"We are a humanitarian medical organization, it is not our task to propose political solution. But what we do know is that the closure of borders and lack of other options to seek safety and dignity has forced desperate people, who want to seek asylum or just find a dignified life in Europe, towards more dangerous routes," Fabbri added.

Since 2015, Europe entered a refugee crisis in 2015 and regardless of the fact that the crisis' most acute phase has passed, hundreds of thousands of migrants still try to reach European countries using various routes, including via Italy, Greece, Turkey and Balkan states. According to the International Organization for Migration’s (IOM) data, updated on Tuesday, over 114,000 migrants have arrived in Europe via sea since January 2017, while the number of migrants' deaths in the Mediterranean has reached 2,385 people.