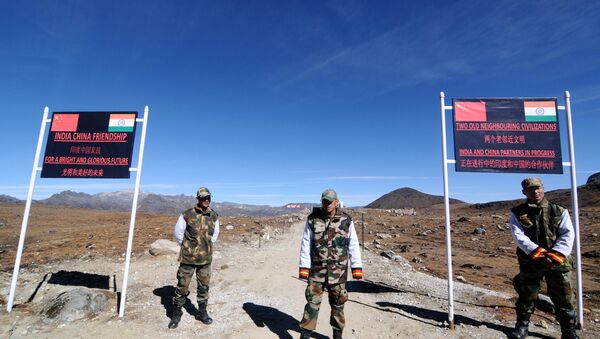 In documents released by the Chinese foreign ministry and the Chinese Embassy in India, Beijing has claimed that a number of Indian troops at Doklam have come down to 40 plus from 400 at one point.

NEW DELHI (Sputnik) — India said the Chinese claims about troop withdrawal from the Doklam are not true. Indian defense sources said the forces stand as they had previously against the Chinese troops.

"As of the end of July, there were still over 40 Indian border troops and one bulldozer illegally staying in the Chinese territory," the report named, ‘Facts and China's Position Concerning the Indian Border Troops' Crossing of the China-India Boundary in the Sikkim Sector into the Chinese Territory', claimed.

In the report, China has mentioned several photographs and comments from former leaders and conventions to justify its claim on the Doklam standoff area. In one photograph, it is being seen that dozens of troops along with two military vehicles trespassed and are trying to stop road ongoing construction works by China.

It has also quoted two letters written by former Indian PM Jawaharlal Nehru to Chinese Premier Chou En-Lai in 1959. "This Convention of 1890 also defined the boundary between Sikkim and Tibet; and the boundary was later, in 1895, demarcated. There is thus no dispute regarding the boundary of Sikkim with the Tibet region," the letter read.

China has also added a new reference of May 10, 2006, besides the 1890 convention and the 1959-60 letters which say, "Both sides agree on the boundary alignment in the Sikkim Sector." Also for the first time, China publicly claims that it "notified" India about the road building as a "goodwill" gesture.

"China did not cross the boundary in its road building, and it notified India in advance in full reflection of China's goodwill. The Indian border troops have flagrantly crossed the mutually-recognized boundary to intrude into the Chinese territory and violated China's territorial sovereignty," it says.

It is alleged that over the years, Indian troops have constructed a large number of infrastructure facilities including roads at the Duo Ka La pass and its nearby areas on the Indian side of the boundary, and even built fortifications and other military installations.