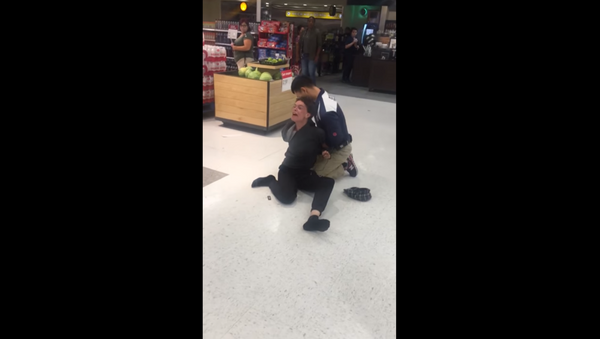 Be warned: this video contains profanity and racial slurs.

​Once restrained, the woman began to plead and scream for help.

"I don’t think the lady was on drugs," Walzel stated in a YouTube post. "But if she was, she was also mentally ill. She talked a lot about terrorists keeping prisoners in a 'flesh cave' down in the basement prior to the video."

Harvard Takes Back Admission for New Students Over Racist Memes
According to Walzel, multiple employees at the North Hollywood Target store "were on hold with the police for about 10 minutes prior to the start of the video."

Walzel also noted that despite the guard being "sworn at, threatened and spat on" he only stepped into the situation "when [the woman] started grabbing heavier objects to throw at customers."

Sadly, this isn’t the first time Target staff have had to deal with unruly guests. Last year a man began to curse and throw the "n-word" around after he ran into an issue at the store’s guest services department in Texas, The CW 33 reported.

While Target has yet to release a statement on the incident, the company did state in their 2016 response that there is a "zero tolerance policy for harassment or discrimination in any form. We have extensive policies, procedures and training in place to help ensure an environment where all guests and team members feel welcome, valued and respected."