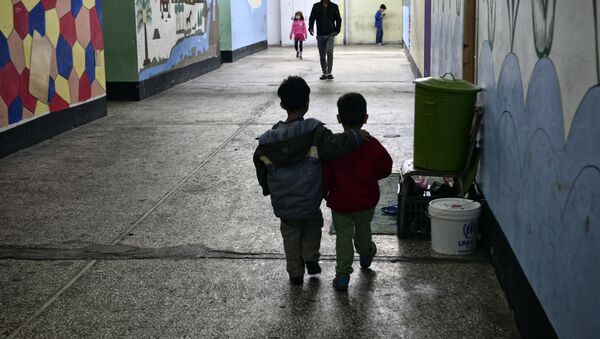 A prominent human rights organization expressed its concerns Wednesday in a letter to Greek Migration Policy Minister Yannis Mouzalas over the dramatic increase in the number of the unaccompanied children (UAC), kept in Greek protective custody.

Refugee Agencies Demand Greater Action From EU Over Mediterranean Migrants
MOSCOW (Sputnik) – As of July 19, only 117 out of the 1,350 UAC awaiting placement in a shelter were in the Greek protective custody, according to the data provided by the National Center for Social Solidarity (E.K.K.A.). On June 2, the figure slid to 50 UAC out of a total of 1,118. The current figures present a sharp contrast to the November 2016 data, when only two children were detained under the police protective custody regime.

"I am writing to you to express Human Rights Watch’s deep concern at the dramatic increase in the number of unaccompanied migrant children detained in ‘protective custody’ in police station cells and pre-removal detention centers across Greece," Executive Director of the Human Rights Watch Europe and Central Asia Division Hugh Williamson said.

Williamson called on Mouzalas to accommodate detained UAC in the open facilities, and provide them with adequate living conditions and access to basic services.

International law, as well as Greek law, stipulates that the detention of unaccompanied children should be considered a last resort measure, Williamson recalled.

Many countries in the Middle East and Africa are marred by conflicts that force people to flee their home countries or seek asylum. Hundreds of thousands of migrants are trying to reach European countries by various routes through Italy, Greece, Turkey and the Balkan states. According to recent International Organization for Migration (IOM) data, a total of 11,280 migrants have arrived in Greece since the beginning of the year.