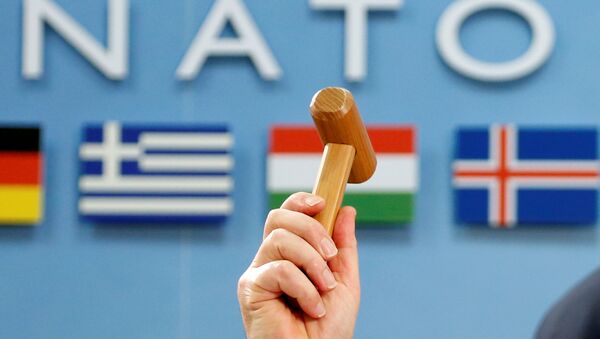 US Vice President Mike Pence’s visit to Georgia reiterates the support of the United States for the country's aspirations to join the North Atlantic Treaty Organization (NATO) and is bringing Georgia a step closer to the Alliance, a Georgian lawmaker and member of the foreign relations committee, George Tsereteli, told Sputnik.

Cooperating With NATO, Georgia Participates in Bloc's Policy to Deter Russia
MOSCOW (Sputnik) – The US vice president arrived in Tbilisi on Monday to meet with Georgian President Giorgi Margvelashvili, Prime Minister Giorgi Kvirikashvili and other officials, as well as to visit US and Georgian troops participating in the Noble Partner drills.

"Yes, of course, bringing Georgia closer to the Alliance is also one of the aims of this visit. Because, as you know, Georgia was trying to become a member of NATO for the last two decades. There is a quite important level of bilateral cooperation. This is the only one and a single modality at this time, which could effectively secure the Georgian territorial sovereignty," Tsereteli, who is also a vice-president of the OSCE Parliamentary Assembly, said.

The Georgian society chose to pursue integration into the West society, the Euro-Atlantic institutions, including NATO, the lawmaker noted.

"It is a legitimate right of the country. Integration with the European Union and NATO is supported by the United States and, I think, it will also be one of the major topics of the discussions. We also anticipate a strong message of support from the vice president and the President of the United States," Tsereteli explained.

Georgia is not a NATO member but has long been seeking membership and cooperation with the Alliance. In May, the NATO Parliamentary Assembly held a plenary session in the Georgian capital of Tbilisi and adopted a declaration of support of Georgia's NATO integration.

On Sunday, the NATO multinational military exercise Noble Partner 2017 kicked off in Georgia. This is the third time Noble Partner drills are held in Georgia. Apart from Georgia, servicemen from Armenia, Azerbaijan, Germany, Romania, Slovenia, Spain, Turkey, Ukraine, the United Kingdom and the United States are taking part in the exercise, which will conclude on August 12.