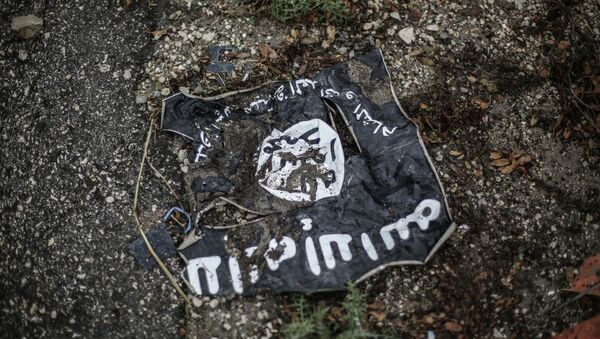 "Islamic State has 20 percent of the [Israel-Syria] border. We can see them very close to our territory, You can see how they behead people on the town squares through the scopes. In other words, we can see here [with our own eyes] what they show on TV," an Israeli officer said during a briefing for foreign journalists in one of the units' base on the Golan Heights.

According to Israeli military's estimate, another 65 percent of the 80-kilometer long (slightly less than 50 miles) separation line in the Golan Heights is controlled by some 20 Syrian opposition groups, ranging from the al-Nusra Front (outlawed in Russia) terrorists to rural self-defense forces. The remaining 15 percent are in the hands of the Syrian government forces and their allies.

Since Daesh fighters came to this area, they have tried to engage in a fight with Israeli forces just once. In November 2016, the terrorists attacked an Israeli secret outpost near the border line, but the air force killed all four jihadists in a counterattack.

The officer called the separation line with Syria "the most dynamic and unpredictable" Israel's border. Israel even formed a special division for protecting this area, with their responsibility expanding over the whole Israeli part of the Golan Heights, where over 40,000 people live in 33 Jewish and four Druze towns and villages. In addition, 3,5 million tourists visit the Golan Heights annually.

"Earlier, we thought that it was too much to deploy a division in this area, as brigades were enough," the officer said, reminding that Israeli divisions are comprising around 10,000 servicemen.

Sweden Turns the Blind Eye to Creeping Islamism, Refugees Flying Daesh Flags
In early July, Russia and the United States agreed upon introducing a ceasefire in Syrian areas next to the Israeli territory. Israeli servicemen say they can see that the intensity of armed conflicts has dropped, mostly from the side of pro-government forces, while the Syrian opposition troops violate the armistice more often due to frequent internal conflicts.

"Nothing has changed in our routine since then [when armistice was introduced]," the officer added.

Daesh terrorists have been present in the southwestern Syria, enclosed by Jordanian and Israeli borders since 2014, forming several groups, such as Liwa Shuhada al Yarmouk. Israeli military intelligence believe that currently the number of Daesh jihadists at the border piles up to around 1,000 people.

Israel took control over the Syrian Golan Heights during the Six-Day War, which broke out in June 1967. After over a decade of managing the territory through a military administration, Israel de facto annexed the Golan Heights in 1981, adopting a law on extending the country's jurisdiction over the area. This move has not been internationally recognized.