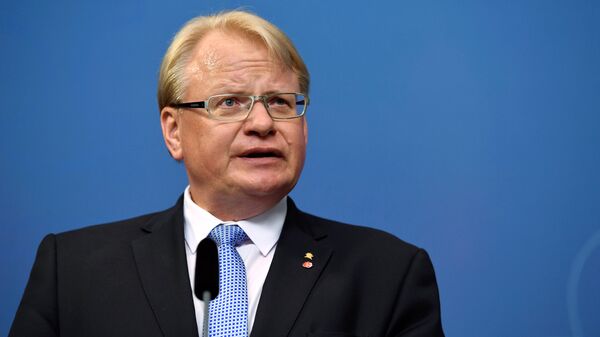 With a no-confidence motion threatening the career of Sweden's Defense Minister Peter Hultqvist following arguably the biggest IT scandal in the country's history, the Social Democrats have launched a Barak Obama-themed campaign to back up their minister.

'IT-Gate' Aftermath: Sweden Shakes Up Gov’t Amid Impending No Confidence Vote
Last week, Swedish Prime Minister Stefan Löfven was forced to reshuffle the Swedish cabinet in response to the opposition parties' no-confidence motion against ministers it deemed to be directly responsible for the leak. While Infrastructure Minister Anna Johansson and Interior Minister Anders Ygeman both had to go in the aftermath of the data leak that made transport databases available to foreign IT workers, Peter Hultqvist was allowed to stay on as a heavyweight in Löfven's government.

Despite Hultqvist's overall popularity with Swedish political circles, the opposition pledged to persist with the no confidence motion against him after he had allegedly "neglected his responsibilities."

The central image of the campaign uses a red-blue stenciled image of Hultqvist, which is strikingly similar to that used by former US President Barack Obama in his election campaign. The original Barack Obama 'Hope' poster was designed by Shepard Fairey and became iconic after being used in the 2008 presidential campaign.

Why The Guy Who Created the #Obama ‘Hope’ Poster has Lost #Hope in #Politicians http://t.co/9KiASHgnan #ShepardFairey pic.twitter.com/WFYyX3DvzS

​The 'Support Hultqvist' poster utilizes the same recognizable style and color scheme, but is complemented with a reference to a Swedish anti-mobbing campaign from the 1980s, replacing the original "Don't touch my friend" text with "Don't touch my Defense Minister."

Massive IT Leak Threatens to Bring Down Swedish Government
Peter Hultqvist has served as Sweden's Defense Minister in the Stefan Löfven government since October 2014 and has been generally perceived as competent in his role.

Jacob Westberg, associate professor in security policy and strategy at Sweden's National Defense College, argued that it "wouldn't look good" if Hultqvist were to resign at the time of the Aurora 17 exercise being held around Stockholm, Gothenburg and the island of Gotland in September. Aurora 17 is the biggest exercise held on Swedish soil in two decades and in addition to Swedish troops will feature soldiers from Denmark, France, Norway and the US.

"In fact, I think you can say that it is worrying. Sweden's Aurora is not a purely military exercise, but rather a total defense exercise where several different parts of society are involved," Jacob Westberg told the Swedish newspaper Aftonbladet. "Additionally, we live in a time of increased tension, generally speaking. It would thus be unfortunate, if we had this kind of domestic policy battles around the Defense Minister at the same time," he added.

US Military Chief Hails Sweden's Baltic Island as 'Strategically Important'
While Peter Hultqvist's schedule for the upcoming exercise is not clear yet, it also remains to be seen how it will be affected if he is forced to leave. According to Defense Ministry press officer Marinette Nyh Radebo, though, it would be deeply unfortunate if the no confidence vote coincided with the military exercise.

According to the Swedish daily Svenska Dagbladet, the list of possible replacements for Peter Hultqvist includes fellow Social Democrat and Deputy Chairman of the Parliamentary Defense Committee Åsa Lindestam, as well as former Defense Ministers Björn von Sydow and Jan Nygren, yet all of them as temporary solutions.