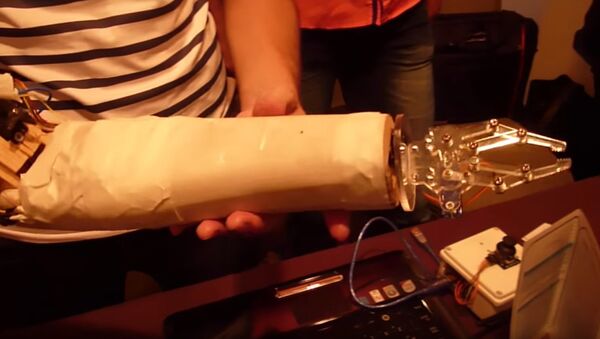 The six-year-long war has left many Syrians in need of prostheses of upper and lower limbs. Students of the engineering faculty at Tartous University have developed an inexpensive arm prosthesis, which is being modernized with an operating system with the help of nerve impulses. Sputnik Arabic got a chance to see it.

Fourth-year students of Tartous University in Syria have developed an inexpensive technology of arm prosthesis, which will considerably ease the lives of Syrians who have suffered in the six-year-long war.

Sputnik Arabic was able to talk to Shadi Ali, a teacher of the engineering faculty of the university, who said that very many Syrians have been left in need of prostheses of upper and lower limbs.

"This prompted the students to start the developments of the prostheses. As the result, they developed inexpensive arm prosthesis. They are currently modernizing them with an operating system with the help of nerve impulses," he told Sputnik.

Shadi Ali said that the artificial arm is made of a special material resistant to high temperatures and humidity. The cost of the prosthesis is 100,000 Syrian pounds (approximately $200).