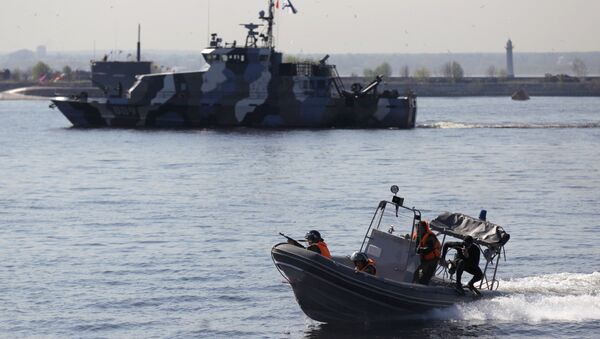 The Russian Navy parade, involving some 40 combat ships and submarines, will be held on Sunday in the Neva river in Russia's city of St. Petersburg and in the roadstead of the nearby city of Kronshtadt.

The visitors of the parade will have an opportunity to see a number of legendary combat vessels of the Russian Baltic, Northern and Black Sea fleets as well as the Caspian flotilla. The flagship of the Northern Fleet, heavy nuclear missile cruiser Pyotr Veliky, and the Borey-class strategic nuclear submarine Dmitry Donskoy will be among the combat vessels participating in the parade.

In addition, the Kilo-class submarines (Dmitrov, Vladikavkaz) and the Varshavyanka-class vessels (Kolpino, Velikiy Novgorod) will participate in the parade.

Combat aircraft such as MiG-29K Fulcrum-D carrier-based fighter aircraft, Su-24M Fencer attack aircraft, and Il-78 Midas aerial refuelling tanker, as well as a variety of helicopters, including Mi-8 Hip and Ka-29 Helix-B, will perform in the aerial part of the parade.

PROGRAM OF THE NAVY DAY CELEBRATIONS

The Russian Navy veterans from various Russia’s regions will arrive in St. Petersburg and Kronshtadt to participate in the celebrations. The festive events will be held across St. Petersburg.

German Media Claims Russian Sub Headed for Drill, Instead of Navy Day Parade
The Central Naval Museum will offer free admission during the Navy Day. The visitors will also have an opportunity to see the warships moored at the embankments in St. Petersburg and Kronshtadt.

The exhibition of anchors will be carried out at the Palace Square, the central city square of St. Petersburg. Various festive events will start at the square at noon, including performances of the military brass bands, the Admiralty Navy Band and other musical collectives. A thematic program will be simultaneously held at the Alexander Garden.

The Park of the 300th Anniversary of St. Petersburg will also host a festival including a photo display, naval workshops, and a concert.

The demonstration of the martial arts techniques by the naval infantry servicemen will become a culmination of the celebration. Apart from this, a regatta between the children's sports schools and a race between the yacht clubs will be held in the Gulf of Finland.

Peter and Paul Fortress will host a marine song festival starting at noon.

"We have decided to revive the main naval parade, which will be held in St. Petersburg. I assure you this is not saber-rattling, it is the restoration, the revival of traditions that are more than 100 years old," Putin said during his visit to Finland.

"We are ready to invite regional partners to take part in the event," Putin said.