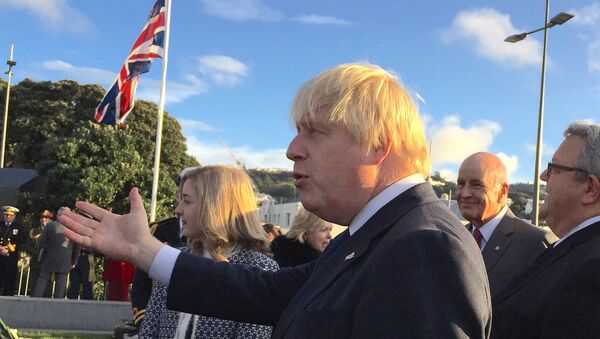 © REUTERS / Nicolaci da Costa
Subscribe
International
India
Africa
In yet another beautiful diplomatic blunder on his two-day visit to New Zealand, UK Foreign Minister Boris Johnson likened the traditional Maori greeting to a headbutt, saying it could be "misinterpreted if used in a pub in Glasgow."

Boris Johnson has never been known to shy away or not speak his mind, and since being appointed to a new ministerial position after leaving the London Mayor's office in 2016, he has continued that tradition.

Kia Ora 🇳🇿! Welcomed to #Kaikoura by Maori elder Brett on my first visit to one of Britain's very closest partners pic.twitter.com/vnbEiEXsSB

​Mr. Johnson, who is visiting the South Pacific nation in a bid to try and strengthen ties between Britain and its former colony before the UK leaves the European Union, has discussed various topics such as trade, foreign policy and international security.

However, the foreign minister's first visit to New Zealand promises to be a memorable one for another reason.

The FM was treated to the Maori greeting, called a hongi — in which people press their noses together — when he visited the South Island tourist town of Kaikoura, which was struck by a magnitude 7.8 earthquake in November 2016.

Boris Johnson says a traditional Maori greeting, the hongi, "might be misinterpreted in a pub in Glasgow" pic.twitter.com/3FL6RUyItW

Mr. Johnson went on to compare the traditional Maori greeting to a "Glasgow kiss," otherwise known as a headbutt.

"I think it's a beautiful form of introduction, though it might be misinterpreted in a pub in Glasgow," Mr. Johnson joked.

He then thanked the Maori people for teaching him the greeting.

​"This is the most mind-blowingly, mind-numbingly beautiful country that I have ever seen," Mr. Johnson said.

The British FM is due to travel to Australia on Tuesday, July 25.