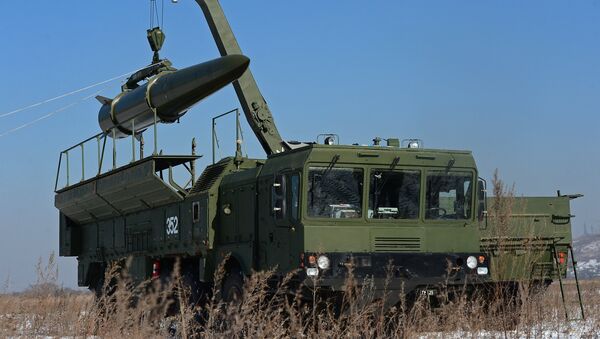 "The brigade in question is the 29th Army’s newly established 3rd Missile Brigade, based in Russia’s colossal Eastern Military District (MD). Formed in December 2016, this brigade was initially armed with the aging 9K79-1 Tochka-U tactical ballistic missile system, and became the Eastern MD’s fourth missile brigade to be re-equipped with the Iskander-M as part of the Russian Defense Ministry’s plan to phase out all Tochka-Us by 2020," the magazine explained.

"As a result, there are presently more Iskander-M brigades in the Eastern MD than any other district; Russia’s other three military districts (Central, Southern, and Western) currently house two Iskander-M brigades each. What, then, is the purpose of these four brigades?" it further wondered.

"Whereas the task of Iskander-M OTRKs being deployed in Russia’s Western MD is to hold US and allied forces in the Baltics and Poland at risk, the systems stationed in the Eastern MD appear to primarily serve a different purpose: strengthening both Russia’s conventional and nuclear deterrence against China," it therefore concluded.

"First of all, we need to take into account that the geographic deployment of Russia's Armed Forces is closely interconnected with historic circumstances of the collapse of the Soviet Union. During the Cold War, the USSR kept the best-equipped and the most battle-capable units of its Ground Forces and Air Forces on the territories of its Eastern European allies, such as the German Democratic Republic (Eastern Germany). Slightly less capable units were deployed on the territories of the Western republics of the USSR," he told Sputnik.

On the European part of Russia there were mostly reserve or standby units, ill equipped both technically and in terms of workforce, he said.

After the collapse of the Soviet Union, the most powerful grouping of the Ground Forces, which was inherited by Russia, was stationed in Eastern Siberia and in the Far East – those were the forces ready to confront China during the Cold War, the political analyst explained.

As Russia is quite limited in its capital resources pertaining to the construction of military infrastructure, such as barracks, airfields, warehouses and other storage facilities, it is still using many of its Soviet-era bases. Moreover, the forces stationed in Siberia and the Far East are being used for operations on the European part of Russia – they had played a major role in the Chechen wars and had been regularly redeployed to the border with Ukraine during the Ukrainian crisis,  Vasily Kashin explained.

Short-range ballistic missiles make up the major part of the military potential of Russia's Ground Forces. As the service life of Russia's aging 9K79-1 Tochka-U tactical ballistic missiles nears its end and can't be extended, all those brigades should be re-equipped with Iskander-M complexes in the nearest future, otherwise they should be dissolved.

Iskander-M Missile System Units Conduct Drills in Russia's West
The brigades, re-equipped with Iskander-M complexes, are being regularly redeployed around the country as part of various military drills.

"It is at least strange to say that Russia's missiles are aimed at China, as China by far exceeds Russia in the quantity of short and middle range ballistic missiles and Russia does nothing to correct this imbalance. Russia does not have the right to possess ballistic and cruise missiles with the range of 500 to 5,500 kilometers, which are the basic component of Chinese missile potential," Kashin explained.

The political analyst also commented on the magazine’s polemic that Russia regularly stages large-scale military exercises in its Eastern Military District due to concerns of the Russian General Staff, which "continues to consider China a potential threat to Russia."

"Of course, Russia, which stations considerable forces in the Far East, is regularly staging large-scale military drills there. It is absolutely natural. For example, Switzerland, which is surrounded by NATO and EU member states, which it has very close ties with, is regularly staging large-scale military maneuvers. Sometimes these maneuvers have very strange scenarios: for example, the collapse of neighboring France and the emergence of hostile rebellious units," the political analyst said.

He further explained that the real purpose of any military drill is to keep military units in combat readiness to ensure an effective response to any future threats. However we can't talk about the threats to and from any particular country, especially considering Russia regularly invites Chinese observers to its maneuvers in the Far East as part of their military trust program.