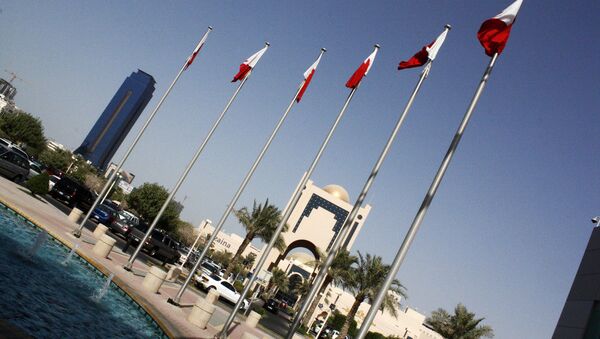 CC BY 2.0 / Allan Donque / Flags of the Kingdom of Bahrain
Subscribe
International
India
Africa
Bahrain Ambassador to Russia Ahmed Saati told Sputnik that Iran continues its secret activities aimed at undermining the stability of the kingdom even after bilateral diplomatic ties were severed and the direct flights halted.

Bahrain Plans to Significantly Increase Tourist Flow From Russia - Minister
MOSCOW (Sputnik) — In June, Bahrain, Egypt, Saudi Arabia and the United Arab Emirates broke off diplomatic relations with Qatar, accusing it of supporting terrorism and interfering in their internal affairs. It came six years after Bahraini authorities blamed Iran for provoking Shia unrest in the kingdom of Bahrain, which experienced a series of protests in 2011.

“In 2011 there was a very small group supported by Iran, they were trying to change the regime in Bahrain and tried to convert it to Islamic Republic of Bahrain controlled by Iran. We caught them, we had all evidence and we took them to court and they were sentenced and the case was closed but Iran didn’t stop. They are continuing to support these movements since 2011 till now and trying to control some Shia young boys and to mislead them… And now I think it is over, after we cut the relationship, diplomatic relations with Iran and we stopped direct flights to Iran, and it is reduced, almost is finished but still they are working secretly undercover," Saati said.

Bahrain Would Like to Expand Military Cooperation With Russia
The ambassador explained that young Bahrainis were lured into disobedience during their visits to Iran and Iraq’s holy places.

“When they are going to Iran to visit holy places in Iran and Iraq they are received by Hezbollah and by the Revolutionary Guards and they try to recruit them and give them some money and training them how to use weapons and make bombs. When these young people come back to Bahrain they create cells and try to operate as groups. We caught so many of them and we caught weapons and explosives, which are brought to us by the sea.  They were coming through the border at night on the ships. Every few days we were catching boys of 18 — 25 years old, who were trying to smuggle weapons,” Saati said.

The Revolutionary Guard Corps is a branch of Iran's Armed Forces established after the 1979 Iranian Revolution, which replaced the monarchy with a republic. Hezbollah is a Lebanese Shiite militant group.