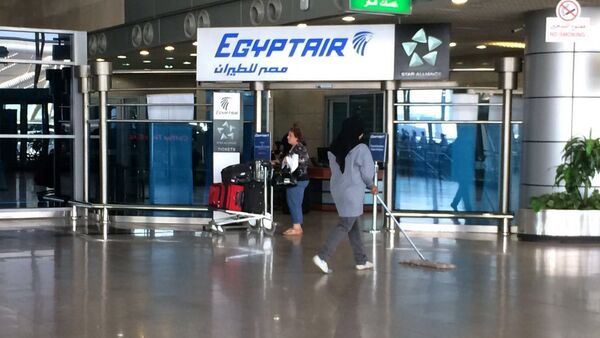 © AP Photo / Amr Nabil
Subscribe
Delegation of Russian experts on air security will arrive in Egypt’s capital of Cairo late on Monday and on the next day begin to examine security measures undertaken in the second terminal of the Cairo international airport, local media reported on Sunday.

Clashes Over Demolition of Houses in Cairo Result in 1 Dead, 19 Injured
MOSCOW (Sputnik) — According to the Sada El Balad news portal, the inspection will continue for three days, the five members of the delegation will examine security measures, examination procedures of passengers and their luggage, as well as the security of on-board food and access of airport’s employees to special zones.

The media added that the experts will examine the second terminal, because the flights between Cairo and Moscow, when restored, are expected to arrive at and depart from it.

In November 2015, Moscow suspended flights between Russia and Egypt, after a Russian passenger plane crashed over the Sinai peninsula, killing all 224 people on board. Russia subsequently qualified the incident as a terrorist act. Work to determine the causes of the crash is still underway. Following the crash, Russia suggested that Egypt should increase security measures and sign a joint Egypt-Russia aviation security protocol.

In late May, Russian Deputy Transport Minister Valery Okulov said that the negotiating process on the resumption of flights between Russia and Egypt was suspended. However, Egyptian media reported, citing a source from the country's aviation authority, that Egypt met all demands set by Russia regarding aviation security.