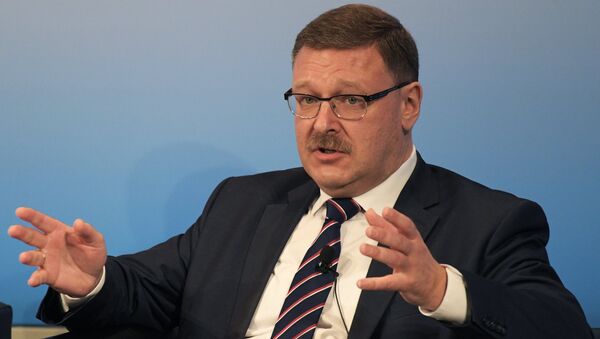 Journalist Union: Newsweek's Deletion of False Trump-Russia Stories Logical
MOSCOW (Sputnik) — Newsweek's decision to delete false stories on alleged ties between US President Donald Trump and Russia could be welcomed, but the risk of publishing such news remains high until anti-Russian hysteria in the United States subsides, Chairman of the Foreign Affairs Committee of the Russian parliament's upper house Konstantin Kosachev told Sputnik on Saturday.

"Unfortunately, until the anti-Russian hysteria in the United States stops… the risk will be inexcusably high," Kosachev said.

The lawmaker added that Newsweek's decision could be hailed, but there was a problem as thousands of people, who had read those false stories would never know that they were false and had been taken down.

On Friday, former Sputnik editor Bill Moran said that the Newsweek online magazine had to delete two false stories of journalist Kurt Eichenwald, who argued that Trump conspired with Russia, basing his allegations on the same mistake Trump and Moran made last October.

Sputnik Editor-in-Chief Mocks Newsweek After Removal of False Story About Agency
The editor deleted the article altogether after it had been online for mere 19 minutes and got 1,000 views. Trump later also cited what he thought to be Blumenthal's statement at a rally in Wilkes-Barre, Pennsylvania.

The allegations were debunked by BuzzFeed's Jon Passantino and even by the Bellingcat blogger group, which reconstructed the sequence of events, and proved that Trump was not quoting Sputnik but brought up the same ill-fated tweet with the screen of the letter.

Eichenwald tried to hush up the mistake, offering the young Sputnik journalist a job as political reporter with The New Republic, warning him about the potential consequences if Moran refused.

000000
Popular comments
unluckely, but someone else could say kriminally, it's quite possible... the bad news is that is close to impossible, for those who are not friends, to get defense by it, since if don't exist how can you proove the opposite?
francescoslossel
22 July 2017, 21:46 GMT
000000
I disagree (with Konstantin), as the lies and propaganda are entrenched in western journalism, take as an example the focus on so-called celebrities and their antics as being newsworthy. The lies will continue regardless of who and what the current hysteria might be focussed upon. It is the way of the western media.
michael
23 July 2017, 01:33 GMT
000000
Newsfeed
0
New firstOld first
loader
LIVE
Заголовок открываемого материала
Access to the chat has been blocked for violating the rules . You will be able to participate again through:∞. If you do not agree with the blocking, please use the feedback form
The discussion is closed. You can participate in the discussion within 24 hours after the publication of the article.
To participate in the discussion
log in or register
loader
Chats
Заголовок открываемого материала
Worldwide
InternationalEnglishEnglishMundoEspañolSpanish
Europe
DeutschlandDeutschGermanFranceFrançaisFrenchΕλλάδαΕλληνικάGreekItaliaItalianoItalianČeská republikaČeštinaCzechPolskaPolskiPolishСрбиjаСрпскиSerbianLatvijaLatviešuLatvianLietuvaLietuviųLithuanianMoldovaMoldoveneascăMoldavianБеларусьБеларускiBelarusian
Transcaucasia
ԱրմենիաՀայերենArmenianАҧсныАҧсышәалаAbkhazХуссар ИрыстонИронауОssetianსაქართველოქართულიGeorgianAzərbaycanАzərbaycancaAzerbaijani
Middle East
Sputnik عربيArabicArabicTürkiyeTürkçeTurkishSputnik ایرانPersianPersianSputnik افغانستانDariDari
Central Asia
ҚазақстанҚазақ тіліKazakhКыргызстанКыргызчаKyrgyzOʻzbekistonЎзбекчаUzbekТоҷикистонТоҷикӣTajik
East & Southeast Asia
Việt NamTiếng ViệtVietnamese日本日本語Japanese中国中文Chinese
South America
BrasilPortuguêsPortuguese
NewsfeedBreaking
16:09 GMTUN HQ Surrounded by Police Responding to Man Armed With Shotgun - Video
16:02 GMT'Source of Pressure'? UK Urges US Not to Mix Up Post-Brexit Issues With Steel Tariffs
16:01 GMTDemocratic, Republican Senate Leaders Reach Deal on Funding Government to Avoid Shutdown
15:48 GMTUS Issues Directive Restricting Transactions in Belarusian Sovereign Debt
15:36 GMT'Have Lost All Respect for Him': Fans Slam Ronaldo for Undermining Lionel Messi
15:09 GMTWhy SCOTUS Can't 'Ban' Abortion & What the Hype Over Roe v Wade is About
14:58 GMTEU Fines Four Major Banks $390Mln Over Forex Spot Trading Cartel
14:55 GMT'Not Based on Legal Rules': Taliban Slams UN Committee’s Decision to Deny it Representation at UN
14:50 GMTNearly Half of US Households Feel Inflation Bite, Report Hardship From Price Hikes, Poll Shows
14:46 GMTPakistan Summons Indian Diplomat for 'Mischievous Spin' Over Desecration at Kartarpur Sahib
14:43 GMTBundestag to Vote on New German Chancellor on 8 December
14:37 GMTTrump's Former Lawyer Michael Cohen Getting Into NFT Market by Selling His Prison Badge
14:32 GMT'People Wish Death Upon Me': Actor Sidhartha Mallya on Backlash for Being Fugitive Billionaire's Son
14:06 GMTPoland Hides Information About ‘Unmarked Graves’ of Migrants, Lukashenko Says
13:53 GMTYouTube Restricts Minors' Access to Video of French Presidential Bidder Zemmour
13:14 GMTPossible Russia-UK Dialogue Hampered by London's Remarks on Russian Threat
12:58 GMTMic Drop! Video of Biden Saying He Doesn't 'Think About the Former President' Rocks Social Media
12:32 GMTSebastian Kurz: Tumultous Career From Political Wunderkind to Bribery, Corruption Probes
12:03 GMTBiden Pointedly Declines to Comment on Report That Trump Was COVID-Positive Before Their 2020 Debate
12:02 GMTOxford High Shooting Suspect & His Parents Had Meeting With School Admin Hours Before Attack - Media