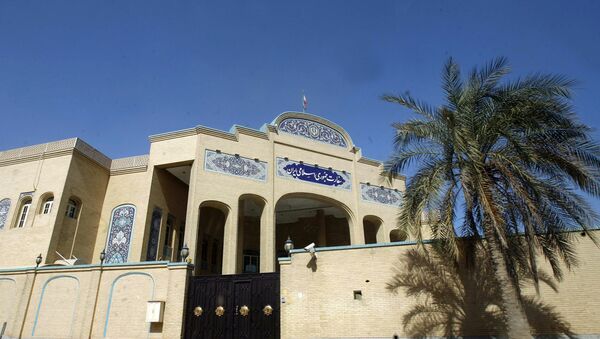 Commenting on the latest twist in the diplomatic row in the Persian Gulf, this time between Kuwait and Iran, Iranian political analysts spoke to Sputnik Iran, revealing who’s really behind this new development and which of the two countries will suffer the most from the consequences.

Iran Summons Kuwaiti Charges d'Affaires Amid Restrictions on Mission's Staff
On Thursday, Kuwait sent a diplomatic note to Iran's embassy stating that the office of military and cultural attaches would be closed down. The note also said that 15 Iranian diplomats, including Ambassador Alireza Enayati, would have to leave the country within 45 days, leaving only four Iranian diplomats in Kuwait.

Kuwait's acting information minister, Sheikh Mohammad al-Mubarak al-Sabah, said in a statement that the move was taken in "accordance with diplomatic norms and in abidance with the Vienna conventions with regards to its relationship with the Islamic Republic of Iran."

According to mass media reports, the moves were made following the conviction of the members of Al Abdali terror cell, whose Kuwaiti members were accused of alleged intelligence contacts with Iran and Hezbollah, a Lebanese Shiite militant group.

The Ministry of Foreign Affairs of Iran has responded by summoning the Kuwaiti charge d'affaires. While rejecting the accusations, Iran has said that the measures taken by Kuwaiti officials are regrettable, given that the existing tensions in the region are now in a critical condition.

Kuwait Closes Down Iranian Affiliate Missions, Urges to Cut Embassy Staff
"We expect Kuwait to act rationally instead of responding to pressures and worsening the tensions," Iranian Foreign Ministry spokesman Bahram Qassemi was quoted as saying by the Mehr news agency.

In an interview with Sputnik Iran, Sabbah Zanganeh, a political commentator, Iranian envoy to the Organization of Islamic Cooperation and former adviser to the Iranian foreign minister, said that the moves of the Kuwaiti authorities have been evidently fuelled by pressure from Saudi Arabia.

The Iranian authorities have not been informed of any details of the ongoing investigation in Kuwait and any charges which have been put forward. Neither the Iranian legal representative, now any independent Iranian experts have been allowed to study the case in more detail.

The Iranian political analyst recalled that there have already been groundless and unsubstantiated accusations made against Iran, alleging that it  played a major role in liberating the territories of Kuwait from the occupation of Saddam Hussein by supporting and mobilizing hundreds of thousands of Kuwaiti residents, similar to the current accusations against Tehran.

"In due course, Saddam Hussein made a very ambitious offer to Iran to capture not only Kuwait, but the territories of other countries of the Persian Gulf. However Iran had never had a goal of the occupation of the territories of sovereign states and the destruction of the system of government of these countries," Sabbah Zanganeh told Sputnik.

Russian Deputy Foreign Minister Meets Kuwait Ambassador Over Doha Diplomatic Row
"Hence this demarche of Kuwait is baseless and is fuelled purely by the pressure of Saudi Arabia, which does not want to put up with the idea that the Arab states of the Persian Gulf, such as Kuwait and Qatar, have good relations with Iran. Saudi Arabia is exerting strong pressure on the Kuwaiti authorities and its mass media," he added.

The political commentator further explained that until recently, Kuwait has been pursuing a very reasonable and moderate foreign policy; however it has come under strong pressure from the Saudis. Where Qatar was the first target of the Saudis, now it is Kuwait's turn. The Saudis cannot tolerate Kuwait's key positions in the settlement of the Qatari crisis, in the negotiations of the Yemeni issue and in the issue of diplomatic correspondence with Iran on behalf of the Cooperation Council for the Arab States of the Persian Gulf. Kuwait, unlike Qatar, is to a far lesser extent an independent state.

In a separate comment on the issue, Iranian political analyst and expert on Middle East and Iranian-Arab relations, former editor-in-chief of the Iranian news agency Mehr News, Hassan Hanizadeh told Sputnik that Kuwait will be the country to suffer from its demarche, while it will have no impact on the economic environment of Iran.

"These actions of Kuwait, aimed at decreasing diplomatic relationship with Iran, have been evidently dictated by Saudi Arabia and the US. As we remember, during his trip to the Middle East, Donald Trump had an important meeting with the leaders of six Arab states of the Persian Gulf in Riyadh. Trump demanded that these states cut their diplomatic relations with Iran or at least lower the level of their ties. Qatar is the first to be punished for disobeying this order," he told Sputnik.

'Rift in the Arab World': Iran 'Wins' From Qatar Diplomatic Crisis
However, he further elaborated, Qatar held firm and defied pressure from Saudi Arabia and the US. Kuwait, in turn, is a sparsely populated country, compared to its neighbors, and prefers not to oppose the pressure of the US and the Saudis. The danger is that this demarche could spark tensions in the region between the Arab states and Iran even further.

For the last 30 years Iran has been maintaining good and friendly relations with Kuwait, avoiding any hostilities. Moreover, in 1990, during the attack of Saddam Hussein on Kuwait, the Iranian embassy in Kuwait sheltered over a hundred women and young ladies, wives and daughters of Kuwaiti emir and his brothers, on its territory from Hussein's troops and then safely sent them to Iran for temporary relocation.

Unfortunately, the current Kuwaiti authorities have forgotten this and are putting forward baseless accusations against Iran under pressure from Saudi Arabia, the political analyst said.

"Kuwait will be the only one to suffer from this demarche. Iran is a large and strong country, which will easily overcome this crisis. Kuwait is not a high priority in the Iranian foreign policy and the lowering of the level of diplomatic relations between the two countries won't have any impact on Iran," Hassan Hanizadeh told Sputnik.

He explained that there are no deep trade-economic relations between the two states, only political and cultural. Hence the demarche won't have any impact on the economy of Iran. 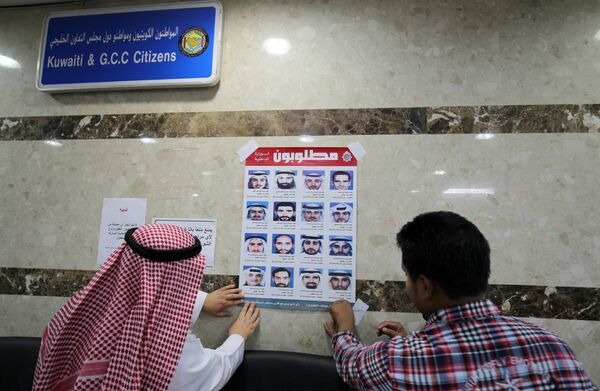 Officials from Kuwait's interior ministry put up a poster on July 20, 2017 in a Citizen Service Centre in Kuwait City, of fugitives convicted of belonging to a cell that had been formed and trained by Iran's Revolutionary Guards who were accused of plotting attacks in the state
© AFP 2022 / Yasser Al-Zayyat

"Kuwait is not the type of country for Iran to spend its intelligence resources on. It has neither a strong army nor any objects of infrastructure, such as a nuclear power plant, for example. It is not of any particular value to Iranian intelligence services. Hence, any accusations of espionage are absurd and unreasonable," he told Sputnik.

The political analyst said that scenario, which has got the name of "Al Abdali process" had been planned beforehand by the Americans and the Saudis. One of its aims is to clear the way for the breakup of ties between Iran and the member states of the Cooperation Council for the Arab States of the Persian Gulf.

Among other possible reasons of the Kuwaiti demarche, Hassan Hanizadeh suggested that it could be the discontent of the fast growing Shia Muslim population of the country. The Shia Muslim community makes over 40% of the total population of the country. And the Kuwaiti authorities don't want them to set their eyes on Iran. Thus they are trying to lessen Iran's influence on their country, he concluded.