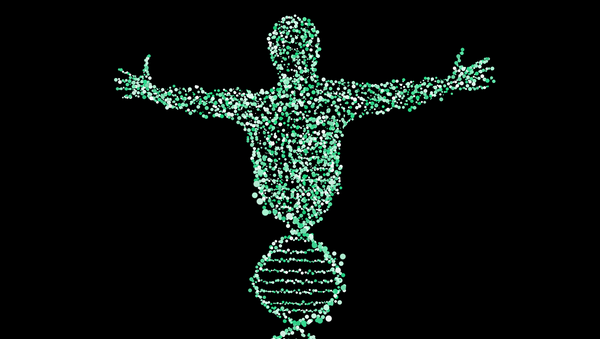 CC0 / /
Subscribe
A new study reveals at least three quarters of human genome is comprised of the so called ‘junk DNA’, seemingly confirming the fact that the human genome is the product of evolution and therefore not artificially created by some outside intelligent force.

Decoding the DNA: Scientists See and Touch Force That Gives Us Life (PHOTOS)
Scientists confirmed that vast portions of human genome are actually comprised of junk DNA that apparently serves no useful purpose, and that the functional part of the human genome is less than 25 percent of the total.

Dan Graur, Professor of the Department of Biology & Biochemistry at the University of Houston and author of the study, told Radio Sputnik that his research was based on the work of the late Herman Muller, geneticist and Nobel laureate who created the concept of the mutation load.

"The mutation load essentially means that every functional part in your body or in your genome can experience changes that will be bad for them. Like in life, every functional entity, if left unchecked, will deteriorate and cease working – you cannot leave your television on and expect that in a million years it will still work. The enemies of genes are mutations, and the vast majority of mutations that happen in the functional portion of the genome are deleterious," he explained.

According to Graur, humanity overcomes this problem by “making more children to replace the population size”, thus compensating for the loss of people who die before reaching the reproductive age.

"Now if the entire genome is functional, the number of deleterious mutations would be so great that it would require each person in the world to have more children than there are galaxies in the universe… So the only escape from this mutation load paradox is to assume that not the entire genome is functional, and according to my calculations based on mutation rate and population size and genome size, the maximum that is possible to be functional is about 25 percent, more reasonably in-between 10 and 15," Graur said.

He also remarked that while his research is about "basic science" and that he doesn’t care about its practical application, the study serves as proof that "our genomes are the product of evolution."

However, it also appears that it is this very large amount of junk DNA within our genome is what makes us human, the scientist remarked.

"I suppose that if everything was functional, first of all we wouldn’t be human, so we would be something more similar to bacteria. We would be able to multiply very rapidly and be able to sustain mutations. The only human who would have a 100-percent genome will be one in which mutations do not occur," Graur said, adding that it is unlikely to happen during his lifetime.

000000
Popular comments
So he's starting off with faith that the theory of evolution is true and building on that he says that to fit in with this faith, 75% of DNA must be junk - and he calls himself a scientist! A true scientist is open minded and does not twist observations to fit a dearly loved theory.
eruit
22 July 2017, 19:54 GMT1
000000
"Scientists confirmed that vast portions of human genome are actually comprised of junk DNA that apparently serves no useful purpose" Another mainstream science myth! Actually I'd say that these so-called "scientists" are themselves the so-called "junk"!