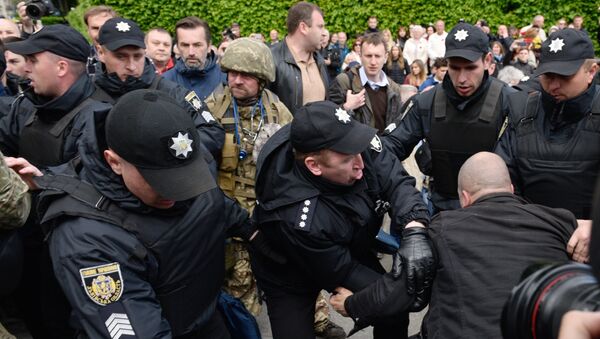 A resolution calling to impose economic curbs on Easter European governments that shut eyes to a rise in far-right sentiments will go to the EU Parliament in fall, a lawmaker from the party behind the initiative has said.

Britain's Far-Right Problem: Terror Group Puts Up 'White Zone' Poster in London
MOSCOW (Sputnik) — The motion is being prepared by the European United Left — Nordic Green Left parliamentary faction, according to its member, Jiri Mastalka, who spoke with Russia’s Izvestiya newspaper in an interview out Friday.

"European Parliament sanctions against Baltic states are an adequate measure. They could be stripped of EU budget funds. Brussels is currently ignoring the rise of extreme-right sentiments in Europe, not only in the Baltics but also in Ukraine," Mastalka said.

The resolution will require support from other parliamentary groups to pass, the legislator said. But its consideration will still send a political message and compel those who oppose it to explain why they do not regard Nazism as a threat, Mastalka added.

The leftist parliamentary faction decided to act after the number of rallies and marches organized by far-right groups with permission from Baltic authorities rose in the past years. Estonia and Latvia have been holding annual parades of Nazi vets since the fall of the Soviet Union.