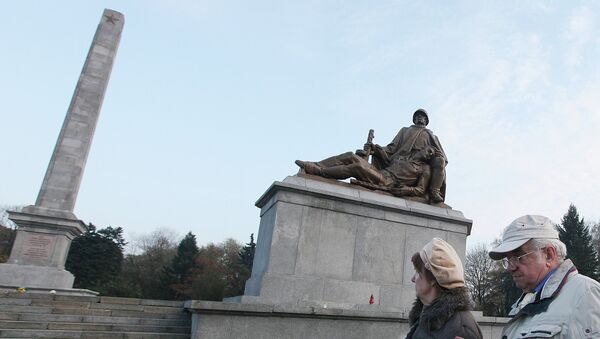 Poland, by adopting a law on removing "totalitarian regime propaganda monuments," is violating bilateral agreements made with Russia on the preservation of burial sites and places of remembrance of World War II victims, Valentina Matvienko, the speaker of the Russian parliament's upper house, said Wednesday.

Russia's State Duma Calls on Europe to Prevent WWII Monuments Destruction
MOSCOW (Sputnik) — President of Poland Andrzej Duda signed Monday a law that will now regulate the demolition of monuments and renaming of objects associated with the Communist legacy, or any other "totalitarian regime." Some monuments are exempt from removal, as the law only targets only those monuments that are intended for public viewing. For example, monuments located in cemeteries will remain untouched.

"This decision is sacrilegious, cynical and absolutely immoral. [Polish authorities] are violating international agreements with Russia, according to which Poland made a commitment to preserve historic monuments. This agreement is valid, it hasn't been terminated by anyone," Matvienko said.

The parliament speaker stated that the "provocative" actions of Polish authorities would not remain without consequence, adding that the Russian Foreign Ministry was currently formulating an appropriate response.

According to the 1992 Russian-Polish Agreement on Friendly and Neighborly Cooperation, Warsaw must protect and preserve Soviet and Russian cemeteries, graves, monuments and other memorial sites located in the country.